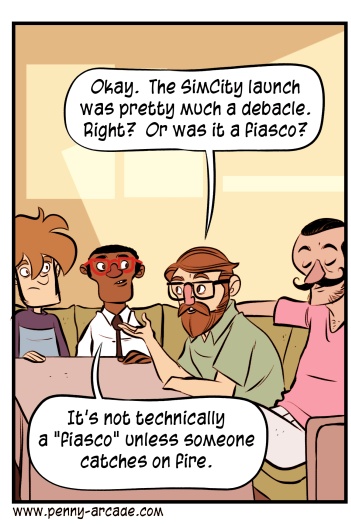 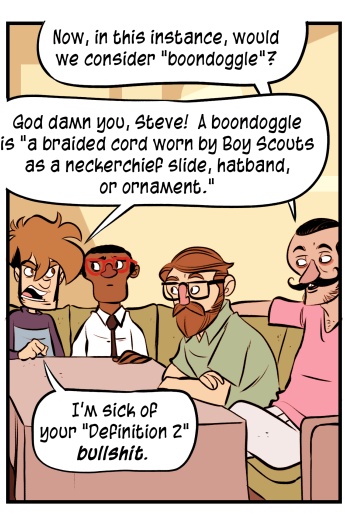 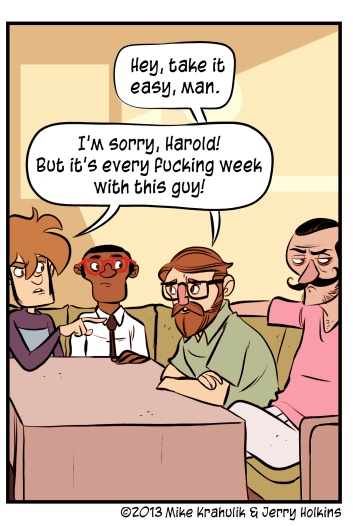 I have wanted to make a comic that used all these words in a single strip, that's the sort of thing I fantasize about, to the extent that I've had them all typed into the Cloud equivalent of strip.txt for coming up on a year and a half. Occasionally, one must do for oneself; occasionally, one must reclaim.

I'm typing this post on a Chromebook, a little one I got off Newegg for two hundred dollars. Like a stalking leopard, it doesn't really make any appreciable noise which is something I have to get used to. I am the kind of person for whom a brutal, godslayer sort of computer is the norm, so when the only sound is the mechanical process of my thoughts being converted into phosphors it starts to feel like performance art.

People occasionally suggest that there is a correlation between

what is purchased, and
what is spent to purchase it

and my experience here does bear this out. Hardware-wise, this is the barest of the bare bones. The bones may be a little too bare, honestly: I am at the point now where Bluetoof is not simply "a cool thing to have." Likewise, the battery on this one ain't especially robust. Finally, to truly make the shift to this manner of computing, the device really needs to be conversant in LTE or some other environmental data solution. So, why do I still like it? Let me count the ways.

After "setting it up," a process for which the term "setting it up" is far too onerous to describe and mostly involves logging into Google, you are done and you have absolutely everything you probably need ever. Think about when you install Windows on a machine, and then you install Steam first thing, and now all your shit is reconstituted or is at any rate reconstitutable. You will be shocked and then relieved when you compute in an environment where absolutely everything is like that. I got scared because it asked me for my password once, but I'd never given it one. Then I realized that it just wanted my Google password; the "local machine" is in this context a misnomer, an artifact. A fetish, almost. Or actually.

I had a plan to travel with an iPad 3 and a Bluetooth keyboard, thinking myself incredibly efficient, master of all I surveyed, etc. There are people who can do that. Maybe they're better than me. Because while I can write under those circumstances, I certainly can't edit. It was fine, and I felt clever or whatever, but it was (mechanically speaking) like trying to pound in a nail with the back of a screwdriver. It was and is entirely possible to do that and be unhappy. There is apparently some kind of ongoing online discussion where people say you can't make things on iPads, but that's not entirely true; Kiko edited card art for the Paint The Line ECG on one, so whatever. I think what's more likely is that many of the people who own them don't care to create on them, and I can't. Reaching up to touch the screen and pushing it or smudging it or having to hold it or using one hand to stabilize it while I use my other hand is concentrated NO. It was a nice idea.

The Chromebook Pixel - a kind of marquee, epitomized version of a Chromebook - would be a complete mismatch for me, let alone a mismatch for the OS conceptually. If one arrived in the mail, I certainly wouldn't throw it in the garbage. But what I like about this laptop is that it is not gregarious in any way. It barely exists; there are many, many things it can't do, which is fucking great. If I was going to spend over a thousand dollars on some sliver of mobile computing, I would buy a generalist device: I'd get a MacBook Air, or emulate Gabriel's example with a Surface Pro. That cover/keyboard thing is no joke. But those machines are much, much more than I want, let alone need. And what I need is very, very simple: a window that looks out onto the Cloud.

Thus far, I've gotta say: I like the view.