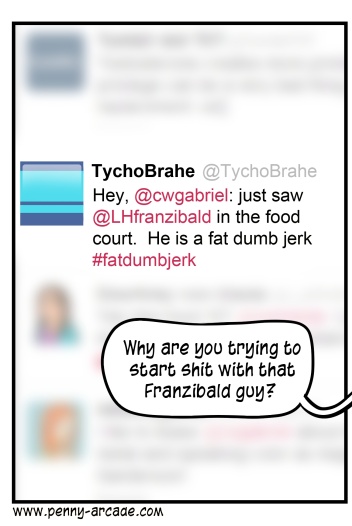 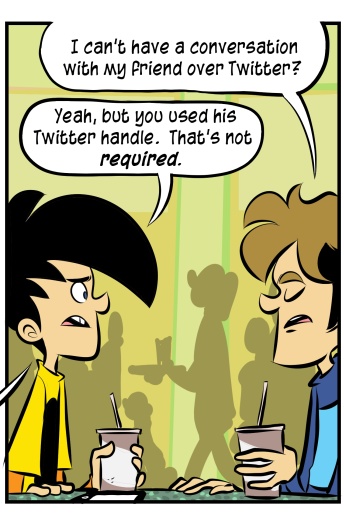 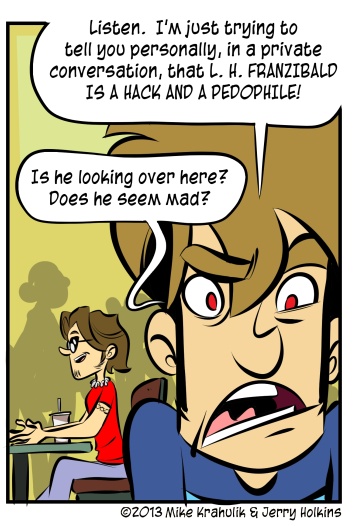 I never know what exactly to do with Twitter. I've started just using it for whatever, which is probably how most people use it. I don't know what my previous plan was; discourse? There are an assortment of non-me people who are capable of that. I can say a whole lot of nothing on there, very easily. When I try to do anything else with it, it's like trying to talk with a live mouse in my mouth.

It is possible to get into a lot of trouble this way. Anonymity is generally thought of as the progenitor of online evils, though in recent years the thinking has moved somewhat to suggest that it's not anonymity generally but the capacity of anonymity to shield speech from "natural consequences" that warps things. Maybe; maybe.

The ability to communicate as broadly as we do, functionally instantaneously, and for those messages to not only be distributed beyond any conception of audience but also functionally immortal is the tricky bit. When I say "there is only one Internet," I'm saying it to as much to remind myself as I am anybody else. I think there is some cognitive, animal meat in our heads that for a lot of people isn't quite compatible with this level of surveillance, and we are only to happy to provide it.

The way I talk to my closest friends would kill you if you heard it. You would die instantly. I don't think this is uncommon, either: people are calibrated to their in-groups. My first thought on any subject would dissolve your flesh. The third thought would accrue in your lungs, negatively impacting respiration. My eleventh thought might be appropriate, might be, with four paragraphs of explanation. Most times when I open Twitter, I just close it again.