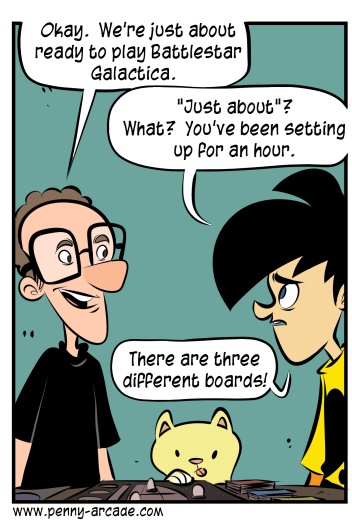 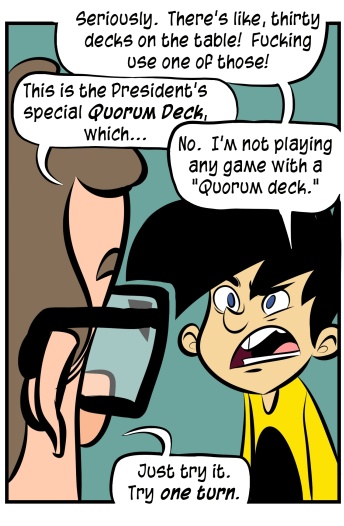 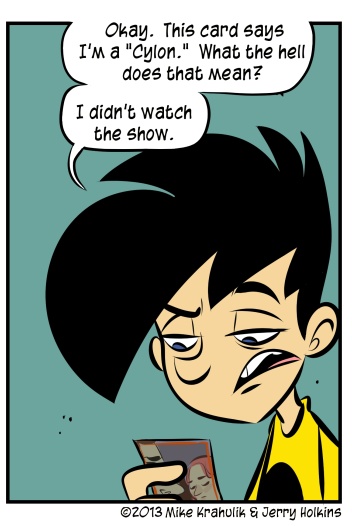 As part of the Kickstarter we did, there were a number of Game Nights on offer, and without fail they've been a blast. Videogames never get played at these things. We always provide a selection, tastefully arranged, with the electronic equivalent of a tangy dip to the side. Nobody cares. Boardgames! That's what's up.

We have a ready supply of these, also, and there are a couple favorites that always seem to turn up: King of Tokyo with the (utterly necessary) expansion comes out a lot. Anomia is a Jamie favorite. I especially like to learn new games with people, which is how we found out that Lords of Waterdeep was way, way better than it had any right to be.

For the last one we did, our guests called the game ahead of time: Battlestar Galactica. And a heap of expansions. It took an engineer almost an hour to arrange. He might tell you it was less, but he's not telling the story, is he.

Gabriel has a tendency to "drown" in games with this many pieces. I like to say that it is because "he is dumb," but that's not right. He's terrifyingly smart. But if you dump a huge box of cardboard on him, and six decks of those little quarter-scale cards that Fantasy Flight likes so much, and then a a Quorum deck (!), I think he's gonna prefer to play a game that he already knows. Whereas I put myself in situations like that on purpose! That is the strange battery which drives our empire.

Shadows Over Camelot is a classic in my opinion, occupying that middle range where new boardgamers find its physical beauty captivating, enthusiasts like the ambiguities of the Traitor, and Hardcore tabletop viziers hate it, but if all they have are people from the first two groups they will choke it down while they back exotic Kickstarters and browse BGG on their phone. I described Battlestar Galactica as "Super Shadows Over Camelot EXX HyperChamp Edition," which our guests seemed to feel was apt.