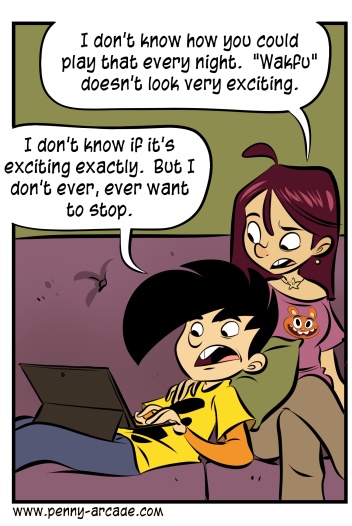 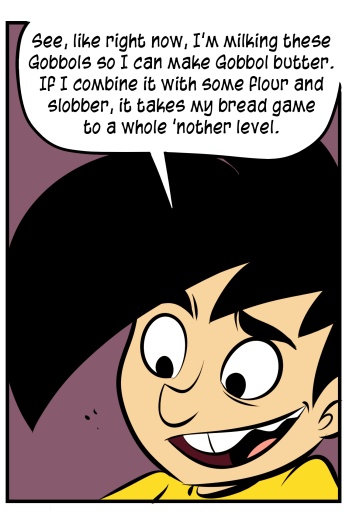 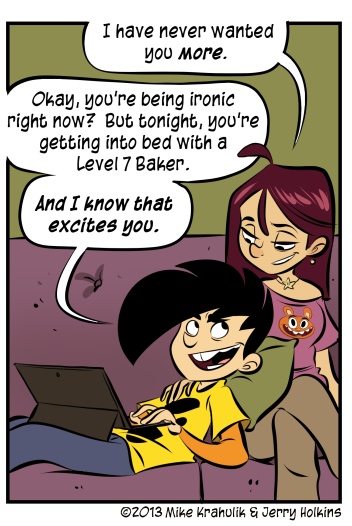 Kara's line in the last panel was delivered, by her, at the time; everything else must be considered l'esprit d'escalier.

We'll start talking about something else on Monday, I'm sure - but the site is sort of about what we're doing, and this is what we're doing now. We're hooked. It's like when you made a friend at school, and all you want to do now ever is play with that one person all the time.

The whole Wakfu/Dofus/Krosmater axis feels super French to me, which makes sense, because it's made in France. I'm not saying that it's bad to be French or something, it's fine. But the whole thing is powerfully, overwhelmingly fucking French. Apparently this Goddamn company also has a turn-based sports game, which, I mean, gah. Let me take a breath every once in awhile, you fucks.

I've played a few excellent betas for "massive" games - Wildstar is something you need to be keeping track of, for example. But playing playing betas especially in that genre is supremely contraindicated. It's like making a sculpture out of icicles, it's the definition of impermanence. And then it converts all the keen interest you did have into boredom when the game comes out and you've already done the first twenty or thirty or forty hours.

So part of what is making us play Wakfu is certainly the thing that makes all MMOs compelling, which is the fiddling-with of little bits. Some of these bits are euphemized as Grain or Tin or whatever, always with the actual bits underneath cycling rapidly in their unconscious circus. But even these are expressed in some weird ways. Let me go into that for a second.

You can gather "seeds" from enemies, even if these enemies are not plants. This means that you can gather birdseed, from birds, and it is not a food for birds but rather something you can plant in the soil and what grows is a bird. It didn't occur to me initially, but it's probably inspired by the notion of "farming" mobs, which has the kind of symmetry that summons boys directly to the yard. If you want a bunch of feathers or beaks or whatever for the thing you're trying to craft, you can absolutely chase them around. But you can also plant a few seeds and cook up custom encounters. That seems interesting to me? They say that brains calcify with age.

I think I might actually be really bad at this game, which is good news. When I get good at something, my response - for whatever reason - is to go find something else to be good at. It isn't to run all over hell's half acre expressing mastery over a different, higher level acorn or whatever the fuck it is in that game's particular cosmology. I have a lot to learn in a game that is, in many ways, a player driven ecosystem, and it'll be awhile before I exhaust its lessons.