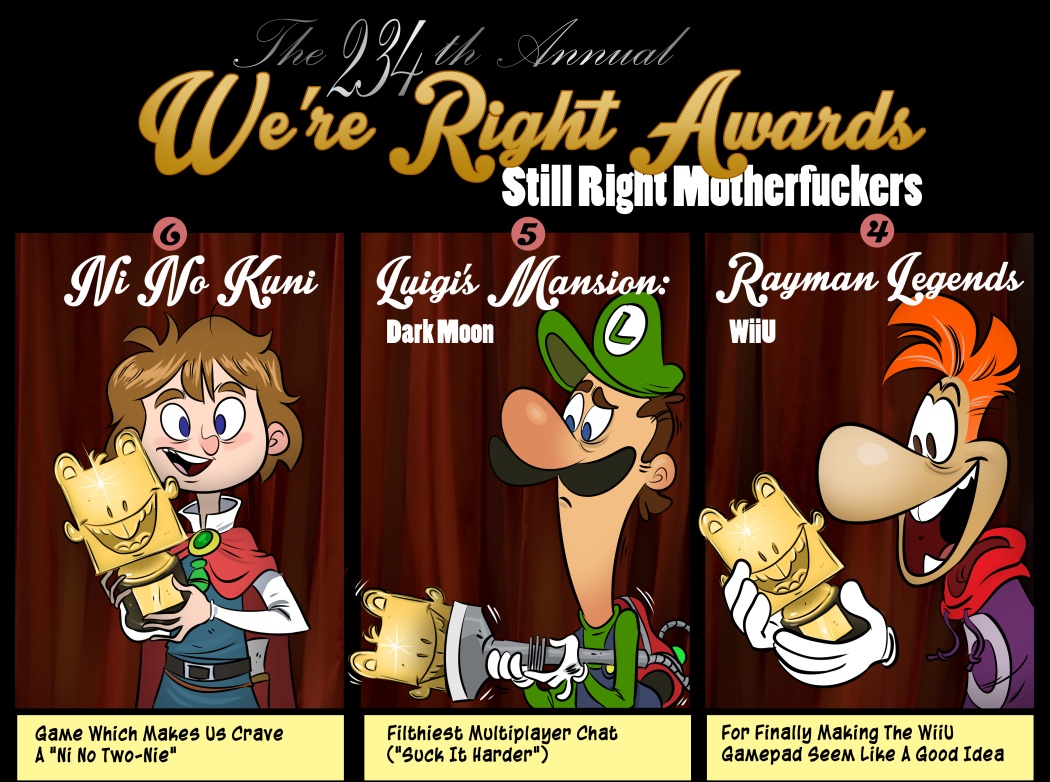 In a tumultuous world, it can be a comfort to settle down deep in just how right we are about everything.

- We both had very different experiences with Ni no Kuni: Wrath Of The White Witch. Gabriel played it with his children occasionally, but the lion's share of each Kuni (?) was for him. This game was an art-feast that continually dished it up hot, splashing over the side of the ladle and getting fucking everywhere. At my house, Ni no Kuni was like a show that I watched with Elliot and Ronia. Sometimes we would just feed creatures together. Sometimes, I would travel half the world to get back to Castaway Cove at Ronia's request, a seaside town where the Law Of Swimsuit makes swimsuits compulsory. Sometimes we would just read stories from a magical book. Sometimes we would fight silly looking monsters, and sing the battle theme together.

It was the first time Elliot had ever given so much as a thought to the death of a parent; before Ni no Kuni, I think I had been functionally immortal. So there is a game on a disc somewhere called Ni No Kuni, and there is an experience you can have, and they are related sometimes and not related other times, and that is simply what happens sometimes when you make art.

- Like myself, you might have felt slash currently feel that Luigi's Mansion: Dark Moon - a sorta sequel about a virtual nobody armed with a nonsensical, ghost-eating vacuum - was slash currently is a safe one to miss. You would be as wrong as I was, with one marvelous corollary benefit, which is that you can grab a cart or download it to a 3DS now and save your own life. This is precisely the kind of wrong you want to be in this life. It ticks all the normal boxes we demand from today's Digimal Sorftwurr, except into the cavity other games are built around, oh look, here's a bunch of straight up humanity. There's no reason you or anyone else should have known that this wasn't a mercenary excursion, brigandry; a maximally safe, utterly nominal enterprise. So, aside from being completely rad, it's also a nice calibrator to remind us about how porous and vaunted what we "know" actually is.

- There are many manifestations of the "new" Rayman, which I define as those running on the same UbiArt guts that throb behind Valiant Hearts and Child of Light. I want to make it very clear, in case the "WiiU" in the third panel does not establish it fully, that we're talking about the version on the WiiU. For the hardcore mega x-lifestyle kickflip gamer, I think there's a cogent argument to be made for the comparatively abstract Murphy inputs on other systems. Like Prince of Persia, let's say, it's another mode of input that lends complexity to the (purposefully) simple load. But what we're recognizing here, aside from a frankly unmatched level of visual craft, is the special interplay they've built between the touch player and the gamepad player. One of the conversations we have now is about people who play games on interactive screens versus people who play games with bristling controllers practically sequined with buttons. The game is a rhetorical can opener, bridging the gap in such a timely way that you're forced to slow clap until it rises in a room shaking crescendo.

The touch player also literally makes bridges for the pad player, which is, you know, pretty cool of them.