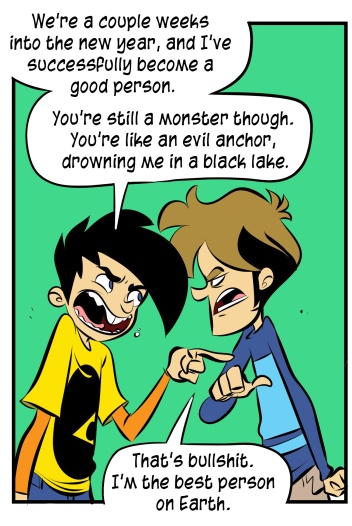 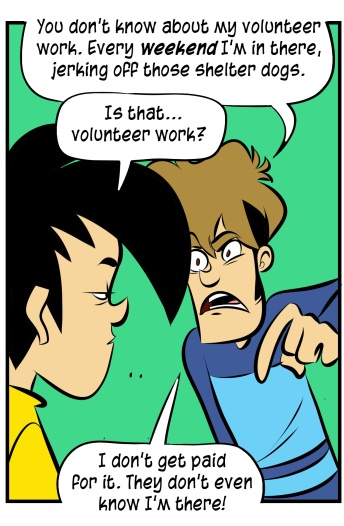 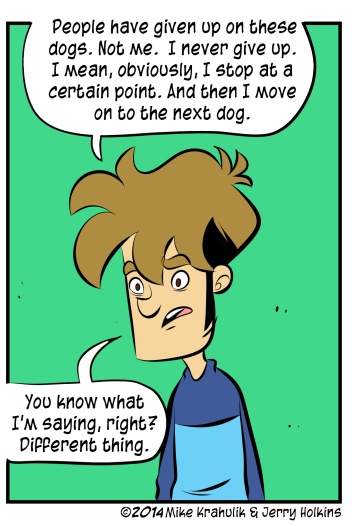 If you have ever savored our podcast, either via the Security Level ULTRAVIOLET official link that backers enjoy or directly via the front door, our creative process resolves to a point eventually but is a distribution for most of it that could become any number of things. "Creative process" may be too ennobling a phrase. It's certainly the process by which something is created, I guess. Webster would give us the thumbs up. Generally speaking it feels like pissing into a sieve, and retaining the stones.

In any event, this time it was just a phrase Gorbiriel had remembered from an earlier attempt, one that never went anywhere because where could it possibly fucking go. That's like a stray thread to us, though. They come back and back and back. We mulled those weird-ass collectibles in Starfox Adventures for days before we were able to condense a jpeg out of it. I remembered writing that strip with utter clarity, but that was in fucking 2002. I don't really have time right now to figure out how that makes me feel. Having a good memory makes dowsing the past complicated; without attenuation to break them down, thin them out, it's frequently an overwhelming business. They aren't filed in any sensible order and every one of them expands to every sense.

I accept that football is a game now, an incredibly complicated game if you don't limit the assessment to the "board" it is played on and the matchup you are currently watching, one with broad economic and social import. It basically drove my town nuts; the Mark of Twelve stands sentinel always.

People here in the office like it, some like it a lot, but Jeff doesn't "like" football and he doesn't "like" the Seahawks. I was talking with him last week, and his hat, coat, and shirt all bore the sigil of our noble avatars. He had even made a custom watchface for his Pebble so he could see the logo, presumably because the rest of his logos were facing out and were thus made invisible.

He helped me understand the game, helped me flank it conceptually, let me enjoy it in a way we might call proper. He has an aura property that confers Seahawks fandom within two squares (ten feet), so that one feels emblazoned even in one's ordinary raiment. He was repaid for it several thousand times over yesterday with their victory, certainly.

I had avoided it and perhaps the entire continuum of organized sport to be unlike my father, essentially; one of those impotent displays of personhood one engages in before they have discovered anything like a self. But I can sit by him as he fades in and out, and share a kind of consciousness with him; we agree on nothing, except nothing. We are molecular enemies. But we can agree that the ref is almost certainly on the take.