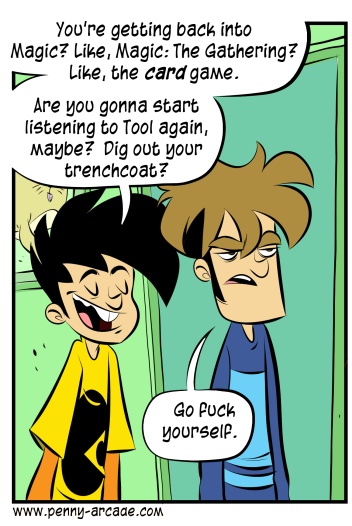 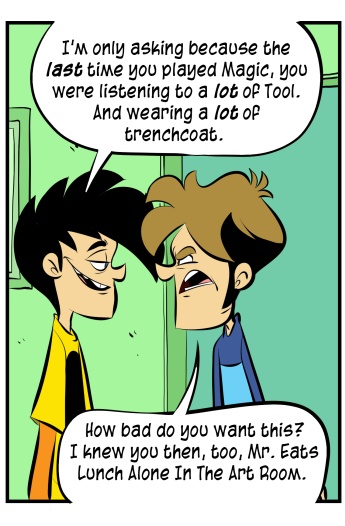 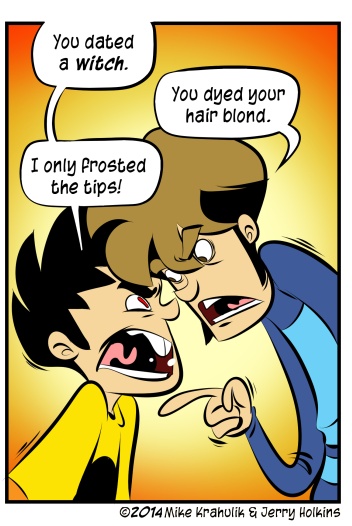 We were sorta going over all the stuff we've been occupying ourselves with, trying to figure out which one of them might present a handle or might be transmuted into jpeg form - Loadout maybe, we've been playing that. Then I mentioned that I had, inexplicably, decided to become a Planeswalker or whatever. That's when he took the opportunity to card-shame, but I know absolutely every Goddamned thing about him. The ordnance lobbed in the strip was delivered because it would be effective; it's by no means the largest payload I have. There are profundities within profundities.

You should absolutely date a witch if you can swing it, though. I'm not really able to believe in things that are not true; as a result, I sort of fetishize mysticism. So spending an afternoon with someone filling acorn caps with milk for fairies (just to give an example) is incredibly interesting. I probably could have done without some of the more novel uses for menstrual blood, but hey. She had her shit together. I wasn't really worth knowing when I was 18. That is an ongoing project.

As regards magic of the card variety, though, I used to take my dish wage directly across the street, to the game store over there, and dump it all into boosters. My understanding of the game, and the nascent genre, was so larval that I just played with all my favorite cards in a huge pile. I had my collection in one of those wide Tupperware juice pitchers, I'd just shake them up in there to shuffle them. How did I ever get the mana to power these cards? Yeesh.

The problem with Magic ("problem" should probably be in quotes) is that there is always a new set coming out, so it is always the wrong/right time to play. I have a neighbor who is a designer on the newest batch, and I could tell that he was proud of it, so I was like hey man, let's do a draft or whatever. I thought I was doing something nice, and now I'm totally screwed. I am touring the digestive tract of the sarlacc.

An actual, no-quotation-marks required problem with Magic is that it's intimidating as fuck. I don't always play Magic, but when I do, I like Drafts; there's a few types of play under that umbrella, but it simultaneously places caps on the total set of available cards and the cost, which are the scariest parts. I'm probably never gonna do the Pro Tour or whatever, but - like the games it inspired - it has such a cool mix of expression and randomness that I was like, oh, right. When you can play it on your own terms, there's a lot here.