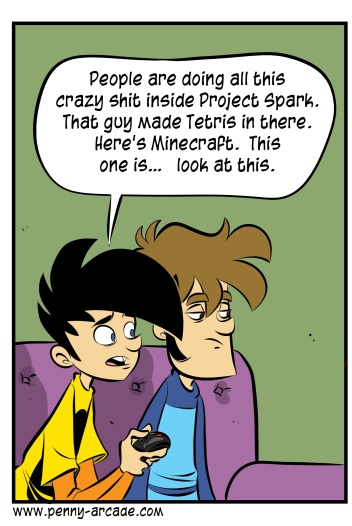 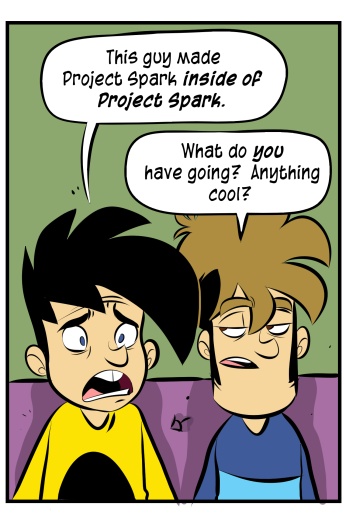 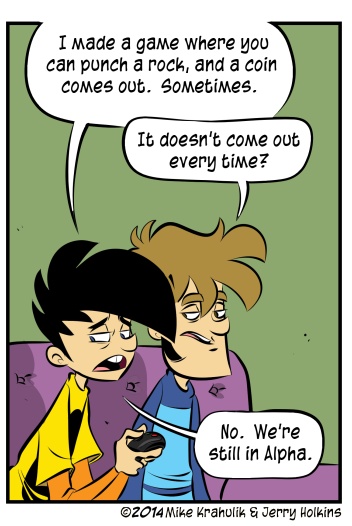 He was fucking around out there Spark-wise when I got to work, and it was clear that he had been putting his best into it. I won't lie: when the camera focused in on a wreath of thorns, and the word "Thornwatch" came up, I felt it in my gut. So maybe he's a little more savvy than we imply.

It's a cool toy that makes toys. If you have kids around, its method of coding is a nice second step up from Minecraft; what's funny is that I think Minecraft is also where you go after Project Spark. You would come back there with a hunger to make ever more sorcerous alterations, and it would still have your back. Right? These are the kinds of toys we are giving kids now. Supertoys, which last all summer long.

I don't know how widespread any technical problems were yesterday with the launch of Titanfall, I played it for hours at various points of the day and experienced only "one weird" problem I'll tell you about in a sec. In a strange piece of synchronicity, assessing the quality of a game's ongoing service seems to have become a press thing all of the sudden, with some outfits offering up partial reviews, some withholding them altogether, and some committing to month-long audits. It's good that they're doing it, but this didn't just start being true. The lockstep these people tend to operate in makes me think we need to consider some kind of contagion. Spores, or something.

The problem I did have - and it happened twice, at exactly the same time - is that when you complete one half of the campaign, it disconnects from something because it "can't connect" to it, which I guess makes sense…? I would probably disconnect under those conditions, too. I didn't lose my progress, but the same thing happened when I completed the other end of the campaign. The "campaigns" are something you play to get the Ogre and Stryder chassis. At least, I think that's the plural of chassis. Chasses?

Anyway, that's why you do those. It has a couple good moments, for me they're mostly related to the custom animations for the Titans. It's an interesting way to try and merge single and multiplayer - it's what Brink attempted, if you'll recall. In practice, your attention is always elsewhere, and what you're doing is often more interesting. And then an audio cue that sounds like it might be interesting gets cut off. I endured it.

It's a weird thing that happens. If you include some nominal Single Player content along with the worldbeating FPS clinic you're running, is your game less good for its inclusion? The reverse happens, too. Multiplayer just happens sometimes in games, somebody says it needs to. Does that hurt the campaign, whose coiffed hair and perfect cuticles startle and amaze? Assessment! Numbers! These are the conundrums you arrive at when you decide that everything is a number, or can be, or that everything has some number hidden it which you can whisper out.