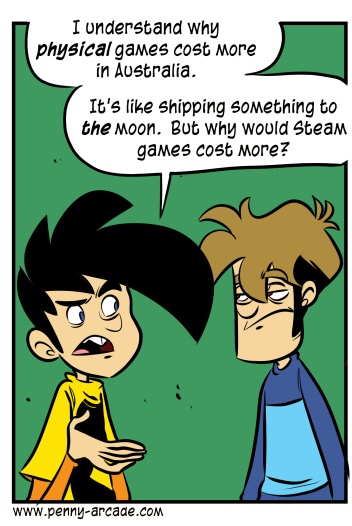 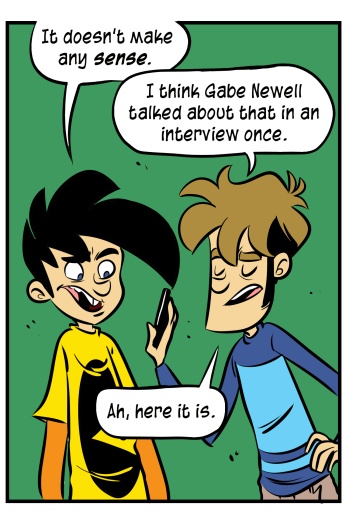 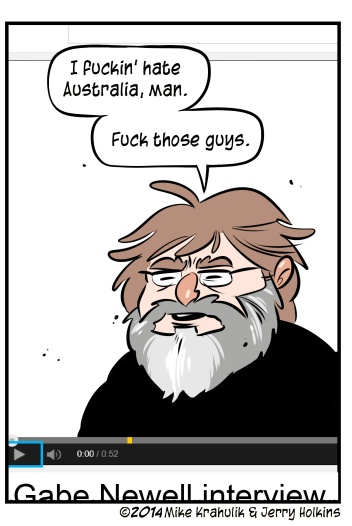 We had talked about the cost disparities for videogames during a Q&A at PAX - a subset of the larger phenomenon referred to as "The Australia Tax" - and Gabriel was legit scandalized by the revelation. I was aware of it because I am a well-rounded global citizen. But I wasn't aware of how screwed it is when you're talking about non-weirdo, non-indie games you would buy at a store - it's almost twice as much.

Obviously, it's not actually Steam's doing, though I think Steam could be a profound agent of change in this regard. Steam is a global caravan, and merchants use it to charge what each market will endure. Here is a point of distinction: I like it when a handheld isn't region locked because I can get weird shit from Japan. They like it when it's not region locked so they can buy regular games at regular prices without being victimized for it.

Digital Delivery, as is often lamented, never realized the promise of cheaper software. Not really. Creatures native to this environment, who have no reflection on the retail shelf, have vastly more power over price. But it should have turned software on its head there, and it would have, if not for the same Mexican Standoff that maintained retail pricing here. Except their version of it was so out of whack to begin with that the situation is basically a incredibly detailed relief map with a placard near the bottom that says Why We Can't Have Nice Things.

Walking out of the theater where we'd held our talk, I was accompanied down to a signing by an attendee of the show who offered to break it down for me. To hear him tell it, Australians pay more for things because they are paid more for things. It is a strange place in this regard. The first time I went, my reservation had been moved to a new hotel, and the luggage dude was like hey, the new place is close. I'll help you get your shit over there. I'm paraphrasing, obviously. But let's be clear: I had no reservation at his hotel. And he used one of their luggage racks to push an extended family's worth of shit almost two blocks. And then he wouldn't accept a tip. He said, "I'm paid enough." I had to look up that last word; I don't think we have that here.

He was actually running the door at that hotel this year, he had a little podium and shit, and I was like, yeah. That's how it's supposed to work.

I'm willing to accept that there are warping forces in play, but "porting scarcity" into the digital realm is something I'm philosophically opposed to. It makes me think about the One-World Government spoken of in Revelations, in thrall to The Beast, and bearing his mark. Obviously, this time is accompanied by blood seas and plague and at one point part of the moon falls down and strikes the Earth. Such a regime would almost certainly result in price parity for Australian gamers, though. So, what do we think. Worth it? Remember the part about the moon.