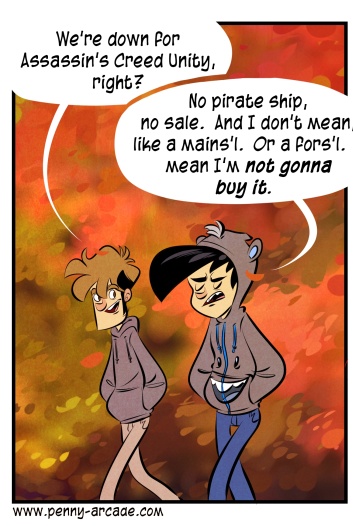 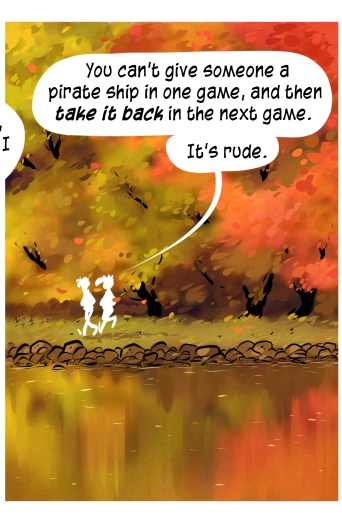 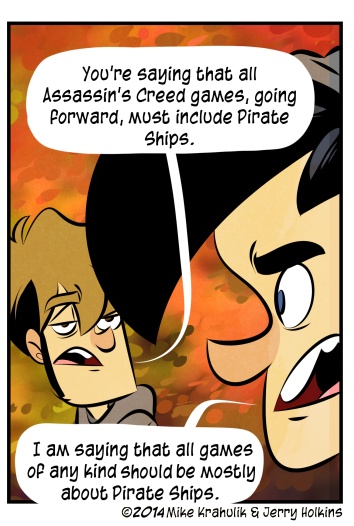 There are only a few series I "run a scam" to get advance copies of. Assassin's Creed is one of them. I'd beaten the game by the time it came out proper, through frenzied play, so I felt like I was missing something. Except I still am. I am either missing it, or it isn't there.

Let me say the nice thing first, because this isn't a nice post: the visuals are bonkers. Graphics need to be pretty fucking out there for Brenna to notice, and she brought the graphics up in a conversation with her parents. As a seamstress, she likes what I do, only she has the credentials to appreciate it: if there is better art in design or execution for character garb, I don't know about it. The environments are "unbelievable," which is to say that they are completely believable as places. Indeed, they are so amazing that some people are barely able to run them. I played it on the Xbox One, conscious that I was probably playing the roughest framerate out there, but apparently it's a mess on PS4 also and is sometimes worse over there. There was a single assassination that ran brutally for me, because there were more people on the screen than I'd ever seen before, but it was "fine" for the most part. The PC version I tried to retreat to had such a pronounced stutter that my inputs were interpreted in bizarre ways. So, no. We're talking about a situation where my compliments couldn't even survive the first paragraph.

The first thing I do in these games is get as much fucking money as I can, so I don't have to think about it ever. Everything else is on hold. I stay getting them francs with my line of immaculately refurbished Parisian cafes. I probably pull sixty thousand an hour. But that's only one of the game's four currencies: there are also Sync Points, granted through missions and used to buy skills. Creed Points are earned every time you do any Goddamned thing, you rake them in like leaves. You use these to upgrade equipment. There are also Helix Credits, a Freemium currency, which you can use to save yourself time doing the other things. I never needed them, because I don't mind spending my time playing videogames. I don't need to "save" it, I'm already spending it how I want. Leave me alone.

The Helix Credits are a conceit tied into the new underlying hook: you are playing the game on a kind of gaming system ("Helix") designed by the setting's "villains" to crowdsource historical exploration. The "Real World" aspects of the series - either working at Google as in Black Flag, or as Desmond Miles - are so sidelined as to be excised completely. I wasn't a fan of the Black Flag approach, but the importance of the past to the present or the future is a core part of what makes Assassin's Creed what it is. They need to figure this out.

The companion app is mostly a creature of the Bar Filler genre, with a few points of feedback into the game proper; the cafes I mentioned before also generate a resource called Nomad Points in the app I can use to fill out the roster of Assassins you can assign to missions. You also solve Hidden Object puzzles which I found pretty engaging, in the service of unlocking more missions for these violent men and women. They'll try to get you to spend Nomad Points on these when you fail, but you can retry for free and it's more fun that way. When completed, these missions are supposed to grant you chests in the actual game. But when I did unlock a chest, Arno still couldn't open it. It made me feel like a mark, honestly. There's a third type of chest you can't open without some kind of incentivised gesticulation. There's so much of this sort of thing that I wonder if some of the "performance" stuff other people are seeing is tied into this overgrowth of network aware interactibles.

One of the coolest parts about the Ezio trilogy was how Italian it was. It may be that actual Italians hated it, I don't know. But chalking up the huge tracts of Italian to an error in the Animus translation software meant they could freight a tremendous amount of atmophere. Everyone in Unity's Revolutionary France is apparently British. I guess what I'm saying is that I wanted way more French, in France. From a French company. Where a lot of people speak French. I even changed the audio language to French, but a lot of the incidental dialogue just walking around had no translations so I changed it back. This is a weird one, guys.

Assassin's Creed III was great - yes, great - because even with the truly, authentically evil chase scene at the end, it's the first time you realize that everything you know is essentially Assassin propaganda. Black Flag plays with this, too. "Unity" could have taken this so much farther, but they didn't, and I don't know why. I'm genuinely confused by it, so confused by the negative space here that I'm trying to convince myself that it's actually the hazy outline of Chekhov's Gun. Black Flag was built on mature technology, and the teething here on Unity flattened the experience considerably. When my friends have caught up to me, maybe I can try some of these co-op heists they've got. I'm geared as fuck. But, man. Gabe liked his boat. I liked my competitive multi. And you miss it, like a tooth.

The AC fan, and I count myself among their number, can overlook a lot. And they will, they'll get through; they'll find things they like. But, I don't know. I thought they were specifically saving the French Revolution as a setting to do it right; The DaVinci Code rendered through the lens of Dumas. Narrative-wise I didn't feel paid as a player; they didn't move the ball very far. I don't know if I'm supposed to invest in Arno - will he be back? They barely give you a chance to like him before the campaign wraps. I named the strip what I named it for many reasons. Not just because there's no boat! You might have heard; I'm a professional writer.