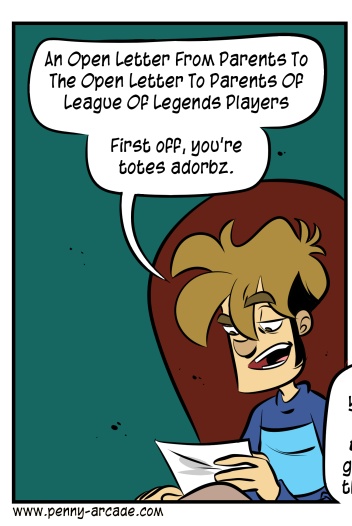 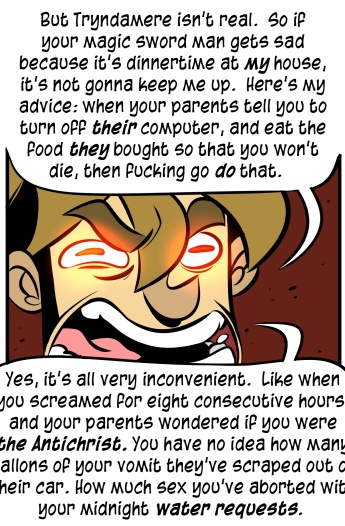 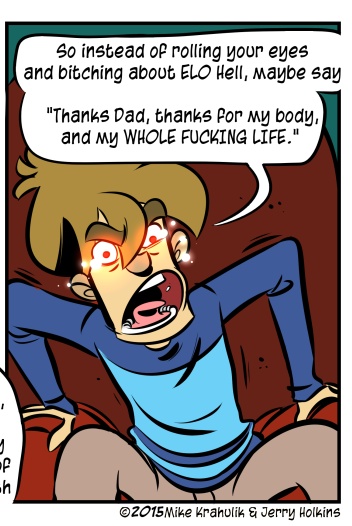 I have described previously how the pool of people who write professionally about games don't really overlap with my life. You can't really get in trouble for that; most people can't help being who they are. You gotta take people as they come. They have been alternately "fed" or "shocked" on this grotesque spherical laboratory simply for doing what came naturally to them at every juncture, and now they're human fucking wreckage, like everyone else.

My "fucking wreckage" is simply inflected differently. I don't have beef with you until you start telling me how to do my shit, which is what The Open Letter To Parents Of League of Legends Players is about. I only know about it because the pool of people who write professionally about games told me it was reasonable, and - like most people without kids - they imagine themselves privy to some secret band of data that has somehow eluded actual parents. You don't know shit. Or, what you know is shit. Take your pick.

Anything in the piece about the length of the game, which is an odd length, is good for parents. That's something they need to know. As a corollary, using this information to determine when a kid has time for a match, also good. Calls to "ground" young people who make poor choices in this regard is another conceptual realm in which we may find agreement. As sad as it may be, there are parents today who did not grow up nerds and so they don't know how the most popular videogame on the planet Earth actually functions. But when you start talking about when I can and cannot set limits on behavior, or withdraw privileges, because of your Statz or because it might attract the ire of a community already legendary for its player abuse, you're punching above your weight, kid.