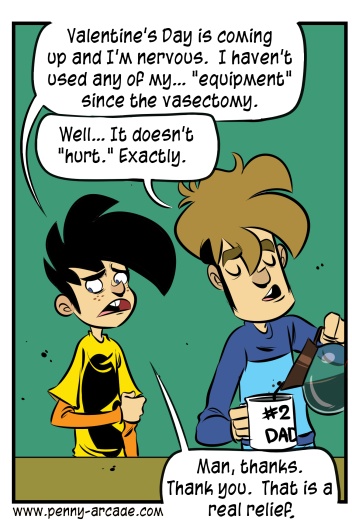 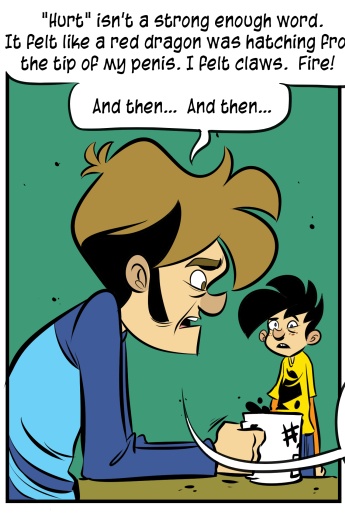 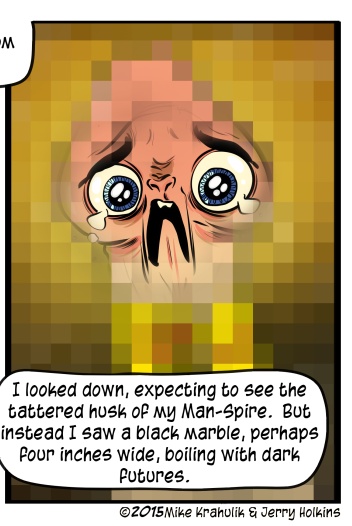 Apparently, a vasectomy - vasectimism? - can be caught. I've started a powerful trend other men are powerless to resist, and Goribraleelon swayed and danced to my flute. This is like a Pied Piper thing, I guess. Except my dick would be the flute in this case? I need to think through some of these metaphors before I commit to them, maybe. Like, just consider some of the ramifications.

You might look at the comic and wonder if there could possibly be a podcast for that strip. Can the MP3 format even contain it, more like!!! But yes, it can; it's just audio. You'll have it soon. The whole thing is scary, and I'm glad I was here to make it substantially worse. Something I didn't tell him before he went in is that after they cauterize all your shit they offer a menu of "aftermarket" services that vary from place to place but typically include a few stalwarts:

I was mostly making all this up but now that I think about it, a Lightning Port would be amazing. Especially at conventions.

Alright. So, I'm gonna post something else in a little bit here. When we were on stage at PAX South, we got a question that asked us what we would commit to, on stage, that we haven't done. Michael - who is called Mihael, by the mountain folk - suggested that he would return to the Iron Church, and become swole thereby. He has done so, and is now a genetic beast lobster. Somehow, I agreed to start that goddamned Lookouts book.

Understand that I have started it many times. I know virtually everything about it. I also know that when I look at the screen in Google Docs my mind is as blank and featureless as the page I see there. When it comes to the strip, or the post, I have very set times these things need to be done, and I always do them. I didn't have a way to cross apply that to a longer form piece, not really - not in a way that had teeth. But apparently a vow in front of a couple thousand people had the correct PSI or whatever. Writing it was hard until it wasn't. I really want to thank that guy, because if you get a book out of this, it's on him. I hope he likes it.