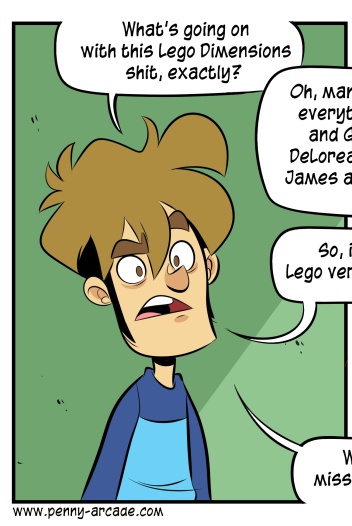 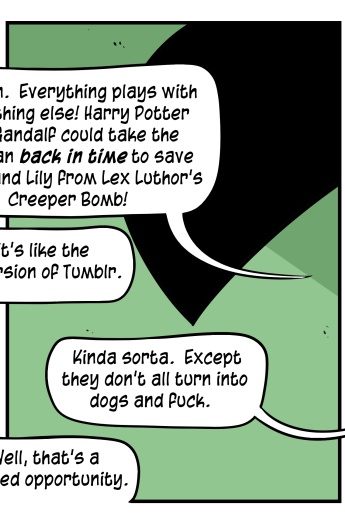 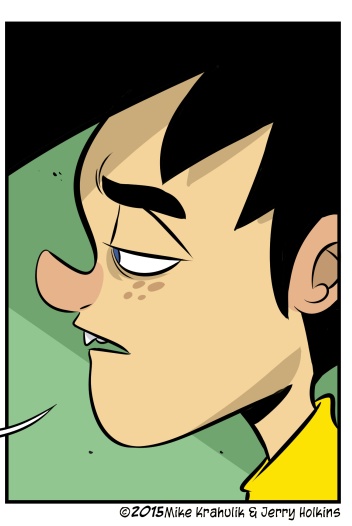 I would have thought Disney was behind the curve a little bit with Infinity, but that wasn't entirely true; a nice line, a novel feature set, and, um, access to the full battery of Disney's geosynchronous branding platform seems to have squared the circle. I would have dark words for the third entrant into such an arena if it weren't Lego. Disney's stable is pretty legendary, but the Lego side of the equation consists of every other notable brand. Disney isn't willing to go whole hog on the crossover stuff outside of a very specific quarantine zone, and that's going to be the Strength (or Might, if you're playing Pillars) of the Lego Dimensions play.

My theory is that it's just gonna be Emmet and Wyldstyle at my house, given the fact that Movie Night with my fam could be called Lego Movie Night with no loss of clarity. Ronia plays with the bricks Brenna had as a kid, and Elliot plays with all my old Lego shit. Kids don't really perceive the hard lines between genres that are so incredibly Important to us; and there's something fundamental about the universally capable Pip that unifies these toys physically and conceptually. I, uh… hm. I just realized that I could talk about this for another thousand words. Let this act as the final parenthesis: not focusing all of my adult resources as a coherent beam on the acquisition of Lego sets requires a substantial investment of my psychic reserves, and this shit doesn't help at all.

For some reason IGN seems to have all the rad Witcher shit right now, lucky them; The Witcher is one of only a handful of games I would try to run a scam to acquire. Not that I didn't pre-order it. I didn't pre-order the DLC, that may be a bit too far, but I bought the game proper a thousand years ago and I am always careful to ensure that there is room for the game on the SSD, in my mind, and in my heart.

IGN has the first fifteen minutes of the game running on what the UI would indicate is the Xbox One; I see a lot of co-marketing for the game and the platform around, that might be part of it. I would be happy playing what I saw. But not as happy as possible. That's why I put a board that costs more than an Xbox One in my computer, for reasons which could only possibly be parsed by those of my storied order. I would never say that it made sense, according the classic definition of "sense." But it is still right.

I think that The Witcher 3 itself, independent of any attempt to make the game a mainstream spectacle, could suffer from a similar inability to parse. What I love about it is doesn't start up high, with big ideas, that form stalactites that eventually come down to where we are. The whole thing is rigorously, obsessively grounded, and goes up, and you go along with it, until you look out and are shocked at what they've done. You've built it too, at that point. I hope that's something that somebody else likes, because this game looks expensive as shit to make.

Geralt has an optional line in the new trailer - really more of an introduction to the game, but w-ev - where he says "Go away, or I'll kill you" and it sounds kinda dumb. But, it's like, I know him. I know Geralt, the sword protagonist hero man. And I feel compelled to tell you that "He's not always like that!" or "You just have to get to know him." But you don't, not really. In the universe I have constructed, the one that ennobles my entertainment choices, there's a reason. But I can't expect you to follow me all the way there; I can only say I gave this team a chance, twice now, and have been richly compensated for my time.