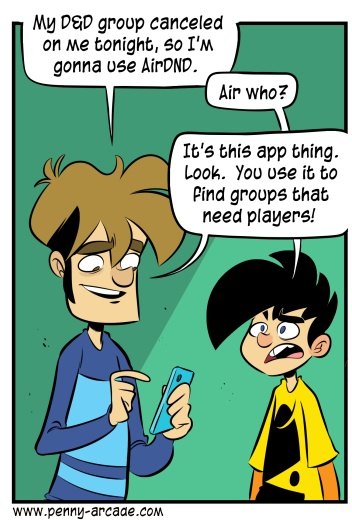 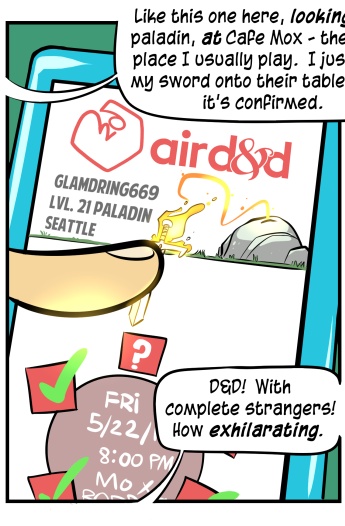 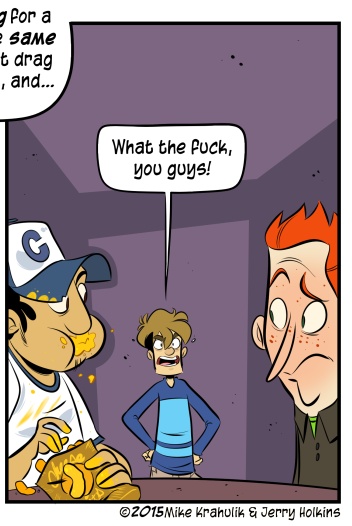 Gavin came up with AirDND at lunch, and it was too good to leave on the table. Utilizing long-forgetten alchemical techniques, including those we have transmuted this notion into a comic strip.

I feel like I'm too new at Destiny to tell you anything of import about the new expansion; I've had a few lucky Crota drops, that's the extent of my career as a Guardian. I'm the inheritor of all the creature comforts and improvements you and Gabriel had to suffer through, I never knew the worst of it. I know that when the game first came out, if you died while in a Darkness Zone not only did you have to restart from the checkpoint, you were also forced to order off the kid's menu. It's terrifying stuff.

No, all I have now is that relentless, smooth loop, of which the Prison of Elders is a good example - and between the novel loot structure and the round modifiers it's filling a very specific role in the experience. I keep trying to sell my compatriots on Trials of Osiris, but they're not super into the PVP, which I kind of get. I'm not super into the PVP either. But I am into gambling.

What House of Wolves means primarily is that I haven't gotten more than twenty consecutive minutes into The Witcher 3. I'm missing out on all the fun! I have read a lot about sub-par foliage, including CD Projekt RED's thoroughly human response to it. Judging from the scores, the game is apparently cool even in the presence of these lackadaisical shrubs. But... I did essentially put another computer's worth of parts inside my computer to play this. I'm trying to figure out if that makes me dumb, or if there's some way I can blame them for this. They'll have a much easier time when they use this engine for Cyberpunk 2077, no doubt; in the grim darkness of the far future, nobody can afford decorative plants.

That said, I haven't even had to opportunity to scoff at some less than ideal sunflowers. I've been waiting for it a long time, so much time that I've become very good at waiting for it. Now it's like I need the mood to be right, just right; candles and shit. I have felt like this before, that there was some proper celestial configuration which must act as a prerequisite, and I can tell you where that policy has lead previously: it leads to a universe where I never actually play the game in question. I can't let that happen this time.