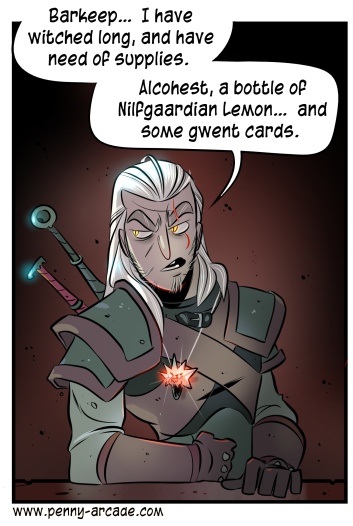 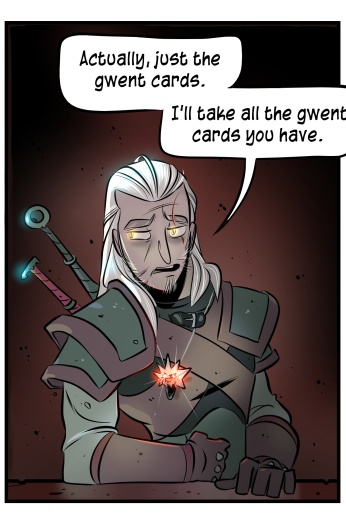 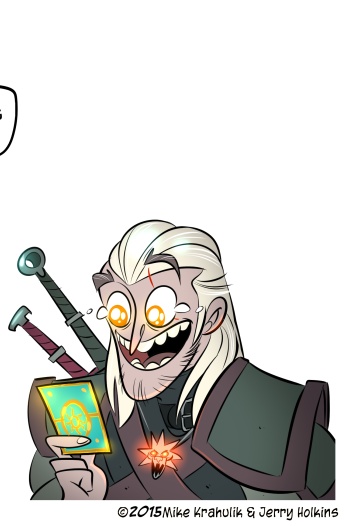 So, last time, I was worried that between Destiny's immediacy and my belief that there was some mystically optimal condition under which to play The Witcher, it would end up sort of like my Steam library, in a list more akin to a list of achievements than of time played or work considered. But that is not true. Having secured 32 Light in order to make myself marginally less worthless to my Fireteam, I had a chance over the weekend to plow through the "Witching 101" portion of The Witcher 3 and into the game proper, which isn't an epic roleplaying game at all apparently but a card game called gwent.

I played a ton of Dice Poker in the second one, I was the Champion Dice Poker Man. It was like Yahtzee, and I like Yahztee. Weirdly, one of my favorite things about Dice Poker was how it emphasized the handcrafted physicality of the game: it was a box that people carried around with them, to play where they could. There were different backgrounds depending on where you played, like the table at an inn let's say. Hearthstone does this, too. Gwent, the minigame equivalent in Witcher 3, doesn't have the same verisimilitude thing going on. On the other hand, it is pretty fuckin' rad.

The article I see most often referred to in this conversation is Vince Ingenito's "The Witcher's Gwent Is A Better Card Game Than Heartstone," whose ambiguous, mushmouthed argumentation leaves the true position of the author unclear - a common problem with young writers. That said, we may triangulate from this aimless prose that the author thinks gwent is at least alright.

And it is. The established side of the commentariat has a couple hundred hours on me yet, but the first thing I do when going to any town is check and see if somebody is selling gwent cards. It reminds me of nothing more than getting my dishwasher tips and crossing the street to the game shop to see how many cards I can get for the money. Am I subsisting primarily on raw chunks of murdered wolf? Yes. But my deck is getting tiiiight.

I'd rather that you explore and learn the basics on your own, I don't like taking that from people, but it's a game you play best two out of three. You draw ten cards from your deck, and you have to play all three games with those cards. In Magic, or Hearthstone, or any game really, you never want to lose, let alone lose on purpose! But that happens in Gwent. Sometimes its the best play. In a game meant to simulate war, such losses can be played as feints; the opponents brings their best assets to a battle you didn't even show up for. Eventually I will think that is just a cool idea. Right at the moment, though, I'm overwhelmed by it.

I was going to say that, unlike many digital card games - ones that play with the mutable data of the cards themselves, or "summon" cards from a superset you don't own - there's no reason why this game couldn't be played on a table. Except we know it can be, because the Xbox One version I never considered for a fraction of a second includes physical decks in its collector's edition. I fully expect to see motherfuckers flopping those cards down at PAX. So, if you bring it, let's be friends.