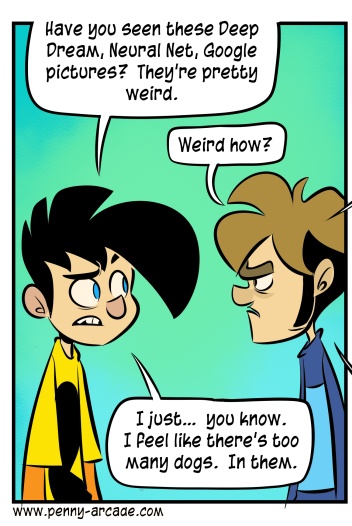 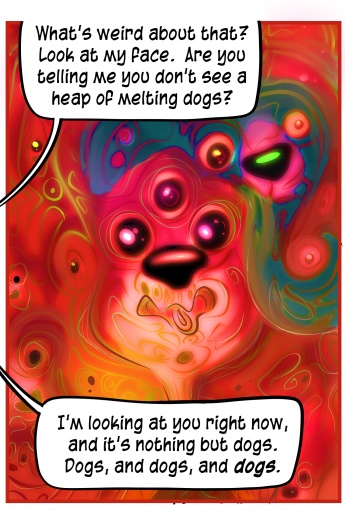 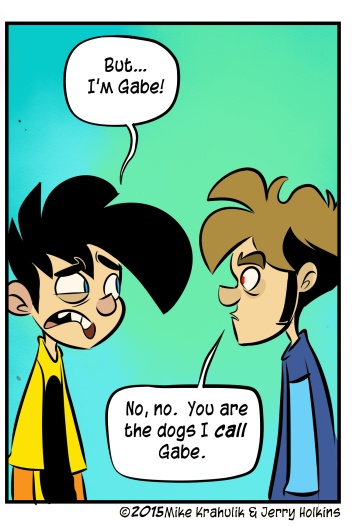 You will be hard pressed to exist on the Internet without seeing tons of that insane Google ANN Shit. When I say Insane Shit, I'm talking about those piles of slimy, wet dogs people keep sending you. Specifically I'm referring to the greasy, omniscient dogs made of paisley slop worshipping birds that dwell in an infinity of jade pagodas.

Where does the synthetic brain stop is my question. It's not hard to imagine, very near to now, a weaponized variant of the Google Maps van with a thing like they have on the front of a bulldozer, except with a jagged split in the middle that opens up like a mouth, and articulated hands that extend from the mouth which can serve as tertiary mouths if necessary. And it is always necessary, because somewhere in its hot cognitive lattice it has determined that all not-dogs rank inaesthetic/th-10 and must be synchronized. Luckily for our misshapen husks, it thinks every Goddamn thing is a dog.

Something that is funny about the strip - if you're me - is that (as sometimes happens) we wrote the comic together, imagined that we agreed on its content, and then when he drew it Tycho literally sees the world in this way when I imagined that he was just fucking with his interlocutor. It's fine. It's cool. We'll make it through this somehow.

The Automata Kickstarter seems like it's actually… doing really good? Like, kicking ass, kinda. It's a big "ask," which I understand is the standard industry terminology for when you want money, but Robert tried to plan it as well as he could so that the budget ("math!!!") all makes sense. There's details on the site, but we're ready to get this thing going if it's something you want to see.