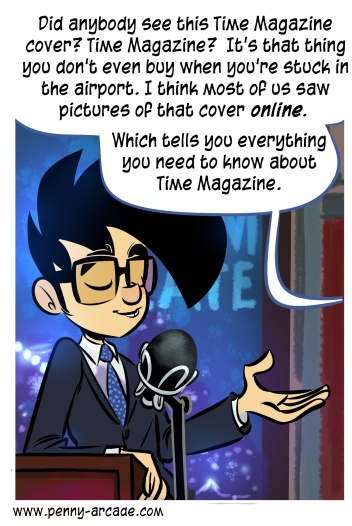 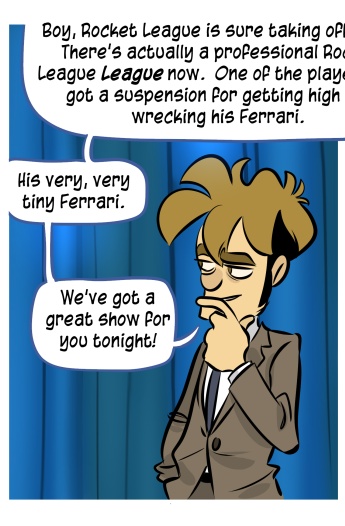 There's so much that you could say about "the time magazine cover," and there is a cottage industry dedicated entirely to this purpose, gripping it firmly and rasping it on a rasper. I've seen like one paragraph of the article, and a couple of the images, because it doesn't exist and isn't important. It's a Wild West facade; there is no Saloon here. If I tried to find the real article, I think it would just be a picture of Joel Stein with a sheepish downward gaze, hands in his pockets, saying "Aw, shucks" while wearing whatever the facial equivalent of a smiley emoticon is.

I want to make something very clear, though; when Time extolls my virtues, they're completely on point and super relevant. In that case the beam is way coherent and arrives in the receptor port without attenuation of any kind.

This is but one of the topics managed so deftly in our incomparable strip. The other one is about Rocket League, which people practice here in the afternoons like… I don't know what's it's like, because I've never seen it here. They practice like… like they're trying to gain or improve a skill.

Something we found out at lunch Friday was that there are three distinct camps here at Penny Arcade re: how big Rocket League cars are, and the joke in the second panel demands that you think the way my cohort and I do. Namely, that these cars are small. There is a second camp that thinks these cars are as large or larger than traditional vehicles. I was surprised to learn of the a third faction - The Gavinites, named for their charismatic leader - which believes that the cars are not full size, nor are they truly miniature. Wrap your head around that.

Hey! The Automata Kickstarter just wrapped up, and having funded at 322k or so, it stretched out, becoming langourous, until via some strange social media alchemy it arrived at 473,494. No rest over here, though: now it's all work - work you have enabled and will sustain with your support. Now, our task is to seize the joy lever on this project and tilt it firmly toward more joy.