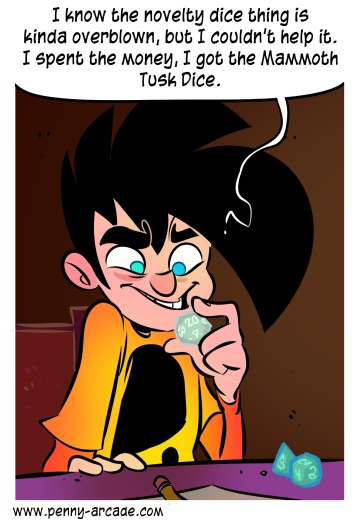 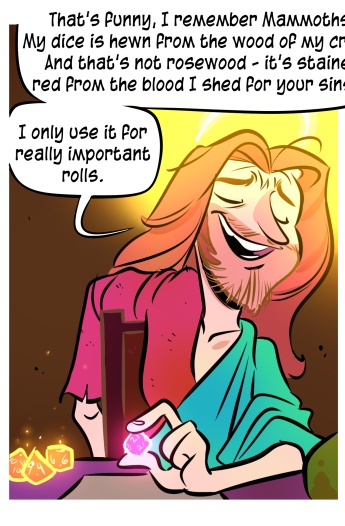 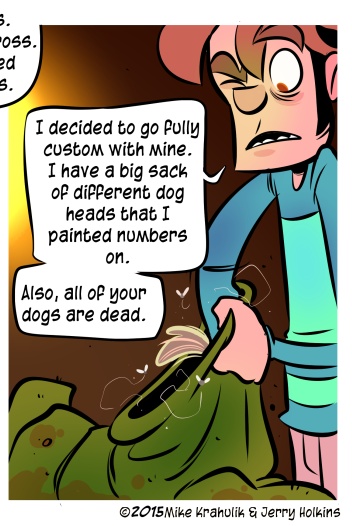 When I was a child, my mother told me that woolly mammoths weren't real, and that the devil - or God, I can't remember - had placed tusks and dinosaur bones or whatever to test the faithful. So now that people are making dice from these things, I don't know if my mom was wrong, or if Satan is just very committed to the joke.

If you are trying to find me at a PAX, for whatever reason, I mean, that's up to you, hie ye to the place that dice are sold and we will cross paths eventually. I always liked dice, but the relationship remained platonic until I read about an intersection between dice, game playing, and famine that elevated the objects to near mystical status. Gabriel once wrote about the dice given to us by a soldier who, in the admixture of boredom and terror which is the unique province of that life, did carve dice from the very stones. That is, of course, a good start - though there are other paths, also.

The Automata Kickstarter ends on Monday at 10 AM, and we're right on the edge (as in, like, a thousand dollars away) from a full 5.1 Surround Sound mix. I just finished the first end-to-end rewrite of the script yesterday, and storyboards are in production now; this shit is moving fast.

I would be remiss if I did not mention the stuff you can tack on to any pledge, stuff we worked hard on and stands every chance of impressing you. There is a pin tier for the project itself, but Dabe also cracked out a really cool, two-layer pin available as an add-on that you might like also:

Dabe's Hoodie is also pretty beast, with some slick Clocktalk on the arm and a fully bangin' embroider on there:

Something tells me I'll be back in here very shortly to talk about the next stretch goal.