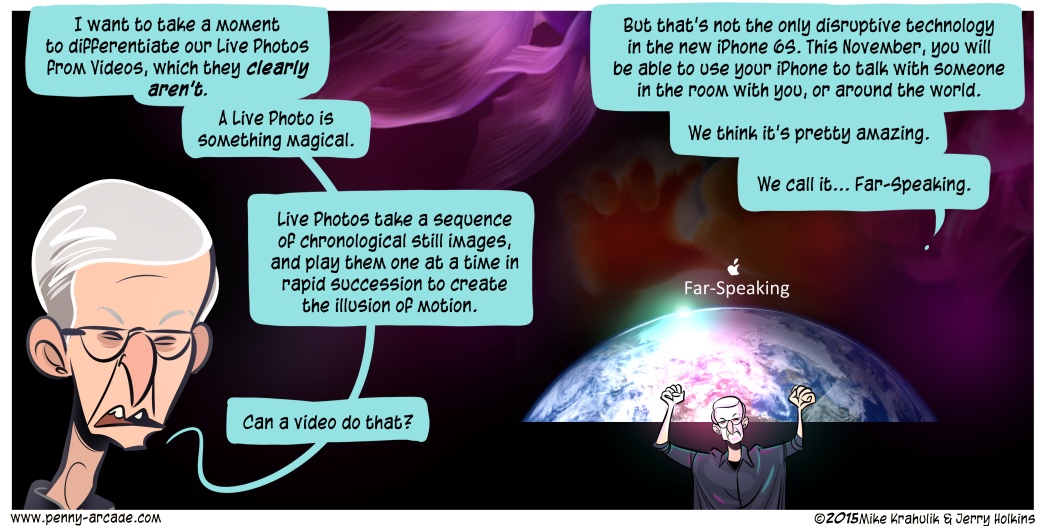 Apple was always a cult, but now it's a cult based on a cult. The revelation has been attenuated, interpreted, made progressively less divine until you see a presentation like the one they gave the other day.

I once attended the opening ceremony for Sakura-Con, they invited us for some reason, and they sat me next to a Japanese cultural ambassador which was double terrifying, because try as I might I could not match his tone of serene reverence for the proceedings. I don't even have that gear. I am the part of this machine that grinds reality into paste.

It was an anniversary for the show, and there was a point during this opening thing where they proceeded to cut, serve, and eat a cake on stage. I have no fear of cake, ask anybody. But that's not when you do that. Apple just sat up there and ate cake after fucking cake, and I wouldn't even say these were earned cakes. They weren't even their cakes, to maintain the metaphor. Indeed, in many cases they just said they were going to start doing shit everybody else has been doing for literal years, all to the hooting of their lobotomized aerie. In the same way that Nike endeavored to brand the calorie, Apple is trying to brand the .gif. This is a rudderless outfit whose inertia alone is carving the Earth.

I've floated in and out of that context for years; there isn't anything really wrong with Macs, but eventually I remember that I like playing videogames on computers and wake up as though from a dream. Every other use for a computer has been relegated to that of a terminal: my "computer" runs on a Google rackmount somewhere, I interact with it via browsers from anywhere. Originally, I had typed "bowsers" there. I want to make it clear: I definitely don't interact with the Cloud via multiple evil turtle kings.

Well, at least it's not Android. There, perhaps, we may find common ground.