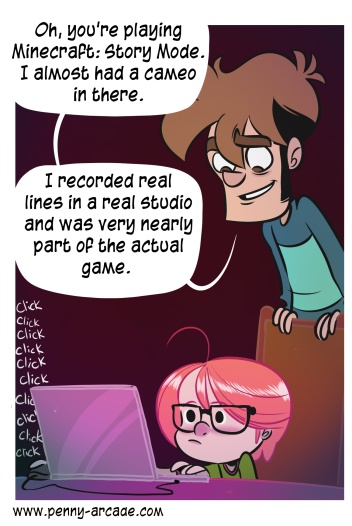 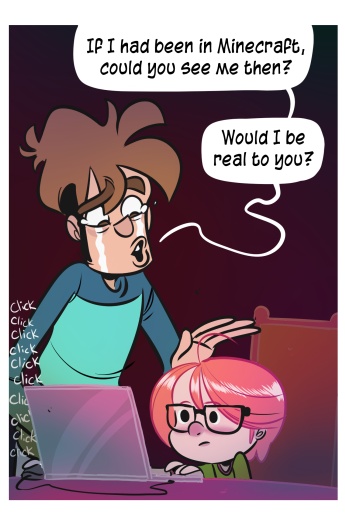 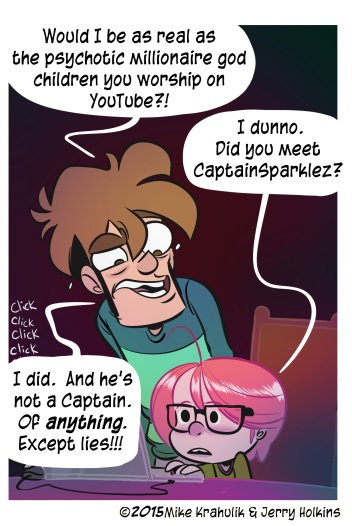 It's quite true! We were very nearly in Minecraft: Story Mode. I was very excited and told my son, in an effort to condense for him into a physical being, but alas it was not to be. Do you want to see what we would have looked like in there? I think it's pretty cool:

Brenna, who has a degree in "theatre" and knows all kinds of shit about it, says that this kind of thing happens a lot. There is a story about somebody who went to the premiere of a movie they were in only to find out that they were not actually in that movie anymore. Indeed, that's more or less what happened to me with Story Mode! The original version of the strip is about being in the game and still not managing to be real, but when I played through it and did not see what we'd done - and I'm really glad I did that - it necessitated some textual healing.

I'd never done anything even remotely like voice work before, and after I had done it, I tried to imagine how I could orient my life in such a way to make it happen with substantially greater regularity. I got a sense of this back when Brenna was in college, but a script is like sheet music. I think because I write things, I had gotten a sense of writing's primacy over all human endeavor. But if you were to put four or five scripts onstage, people would not feel as though they had seen a play. Even a very good script - taut, but bouncy, like a drumhead - is still a pile of paper. And so when you have one in front of you, on a literal music stand, the metaphor is complete. Playing around with the text, being coached in certain directions through the headset, offering suggestions and trying them out, I had no idea how collaborative the process was.

After our boys had played it, what we learned was that Telltale has got ten year olds fucking dialed in. You and I know the Telltale Style by now, and this is an especially broad execution of it - we might not connect with it as we might in say Wolf Among Us. We know a lot about stories; we know the narrative periodic table. But they spend most of their time in games without explicit stories or characters, which is fine; I have no beef with it. When they are given a story though - and characters - inside an iconography they have endlessly tinkered with, and worried, and lived in? They vibrate, like a violin string.