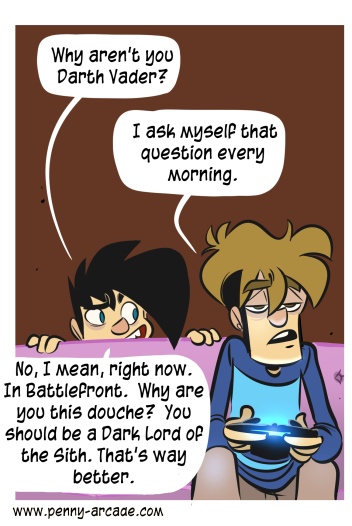 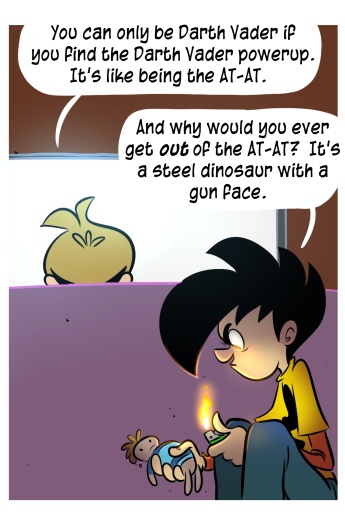 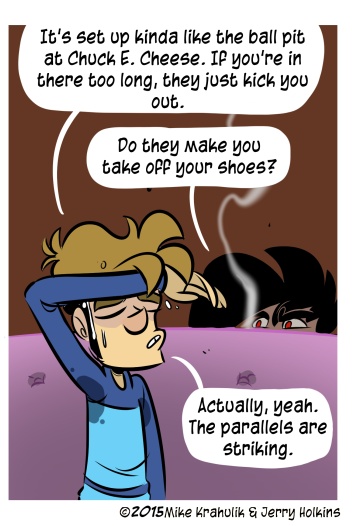 It seemed like more of a Tycho line, so we gave it to him. Or, me. Whoever. Except that while I like watching the beta of Star Wars: Battlefront, I don't especially like playing it and haven't really sought it out.

Obviously, it looks incredible. And they extended the beta program, and I have heard that it has activated social media, so apparently it's working for them on some level. But for me, Battlefield games - and this feels pretty much like a Battlefield game, with a few sops for the filthy casual - are good at the big things and bad at the small things.

The scale is amazing, and with that scale comes many, many deaths after running for a very long time. Individual spawns aren't a premium commodity in these games, and while I think that a realistic cannon fodder simulator is a bold choice and certainly on-brand for the franchise I'm not sure that's what I'm into right now. The audio sells the firearms hard, but as usual the basic shooting interactions in these games don't feel especially tight. What I like about these things most is playing in a squad with a diverse class makeup to hedge the bargain basement value it places on spawns, fighting in and alongside player controlled armor, and awareness of the field. Maybe the full game is very different, I don't know. The small map they have feels like it takes place inside of a literal rut and the big one is like trying to scale a mountain of angry cats. If it weren't attached to a legendary license or attached to shocking technology, we wouldn't be discussing this at all.

Balance against the Empire in the walker level is kinda goofy, insofar as it is not especially balanced and may in fact be off-kilter. I read an interesting article over at Forbes about how not that could actually be kind of cool, and as long as everybody knows ahead of time (The Rebellion was always kind of a long shot) I don't have any problem with this at all. I know designers - famous, named designers, designers you know - who don't actually believe "balance" exists in any real form, let alone as some effervescent virtue to chase around. They don't even try to find it. They want each faction to "feel," ineffably, like itself. But for me, balance isn't even the problem here. The brand just isn't enough to trick me into Battlefield Lite. Except there was a Battlefield Lite, called Battlefield Heroes, and I think I liked it better than this.

I'll get a tremendous amount of value out of Gabriel's purchase, certainly. And I'm absolutely open to the idea that how they've shown their hand in this preview doesn't represent the apex of their philosophy. But between Cordblorps - whose preview actually sold me a copy - Rainbow Six: Siege, and Halo 5's Warzone, which I expect will deliver scale and satisfying small arms interactions, I already have a time allocation problem. I don't know where Battlefront fits.