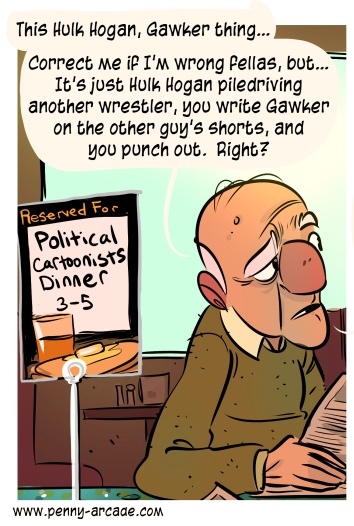 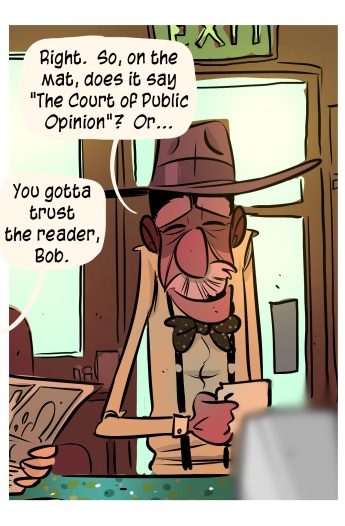 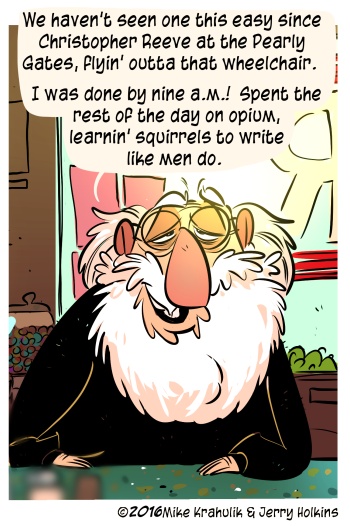 There was a time when you could use exaggeration to communicate - you could leverage dark imagery with the presumption that your audience would understand that you did not mean it literally, but were instead utilizing a rhetorical device to describe feelings outside the boundaries of the acceptable and potentially even amuse a person precisely with the extent of the disparity between reality and the metaphor. Weren't those cool times? That is what we must always keep in mind. Thus, we allow our enemies to disarm us.

You might have heard that Hulk Hogan was suing Gawker. A boon for political cartoonists, to be sure. Gawker got hold of a Hulk Hogan sex tape and, to hear them tell it, thought that posting it online would be the perfect spire of human achievement. Publishing video of this orange, oblate spheroid squeezing and morphing - that's the profound working which Gawker has enabled, they're truly the catalyst for all that is best in our species. The ad revenue was a secondary concern, no doubt. Never crossed their minds. Depending on how they think it will play, maybe they get a sex tape or somebody's private shit and just pretend to be scandalized by it instead of publishing it. Who knows which one it will be? #justgawkerthings, right? It's gotta be fun. Maybe they'll out a competitor's CFO. They're just a scrappy, two hundred and fifty million dollar company trying to make a buck.

Gawker is poison AIDS cancer. In the same way that the Cross is the symbol for the redemptive power of Christ's blood, Gawker is the symbol of a metastasized social media. Gawker is Nidhogg, the dragon which gnaws at the root of the World Tree. The causes they enunciate are tarnished, just for being in their mouths.

I don't wish ill on anyone who works there, obviously. I mean, I guess their every action technically does sustain a legitimately evil beast of legend, some Revelations type shit, and they ruin lives for profit whenever they aren't simply wasting your time. It's like, oh, this other Gawker site does that. That's not the site I read. Well, no, it's all one site. It's just the one site. Oh, but I only detest the mouth of the lion, where its fangs are kept; I do not detest the ear of the lion, nor its tail. But the ear is how he found your brother, and when he leapt on your sister, the tail kept him straight.