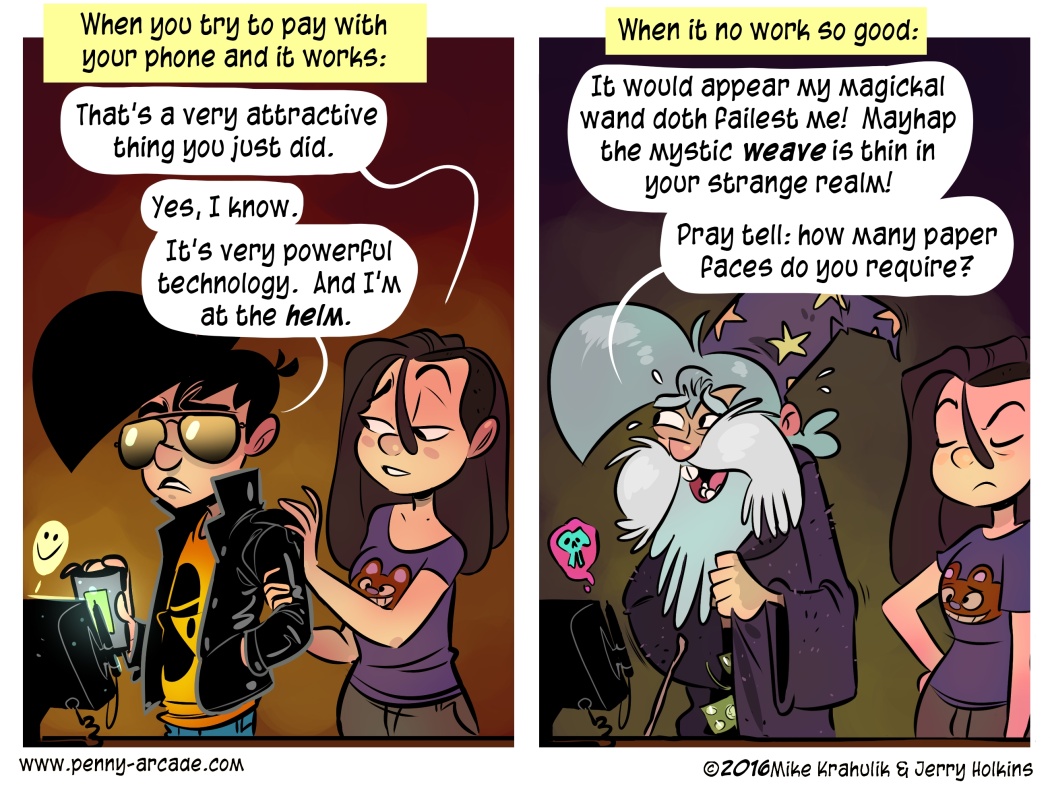 Grab related to me his high highs and low lows when it came to Samsung Pay, which works vastly more often than it doesn't, but when it doesn't, you feel like an anachronism only in reverse. There is such a thing as the old fashioned person who hasn't caught up, but as the kind of early adopter technology we crave is becoming purpose built for social interactions, we now have an opportunity to be ridiculous in an entirely new way.

One of the challenges with this technology isn't a challenge with the technology at all, which is to say, it's a problem with the organism brandishing it or the organism at the register who has no earthly idea why you are trying to rub your phone on things. The cool part of Samsung Pay is that it basically uses a magnetic coil to project the strip from your card, so it grants entre into our glorious cyberpayment future but in a way that you can actually do now, pretty much anywhere you want. The first few times you pay in this way, you feel like you summoned your Patronus.

There's an app on my Pebble that I can use to pay for coffee at Starbucks, you input your card code manually and then it gins up the proper scannable thing on the watchface. I put it in there, and it worked, but I haven't used it since! Which is weird. But reaching back into a stranger's whole, like, zone - the border that separates customer from coffee priest - was as weird for them as it was for me. Plus, it took a couple extra seconds. I'm not worried about the seconds by themselves; we're talking about securing a vital resource here. But when you're in a weird situation already and it takes even longer, each second stretches out into a long, terrifying hallway from The Shining.

I can't do it. It WORKED and I can't do it, not yet. I think I would probably stab someone before I momentarily inconvenienced them; it's just how I was raised.