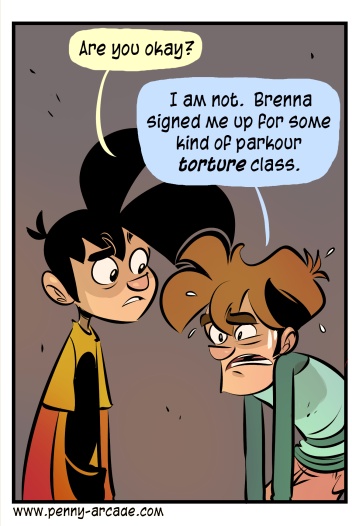 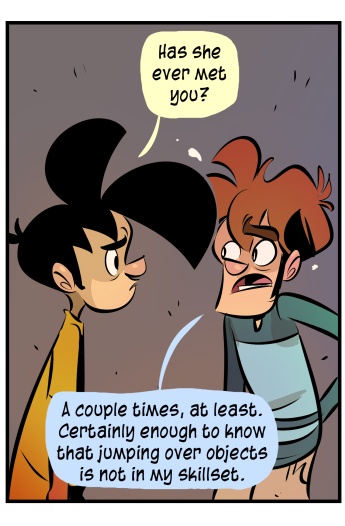 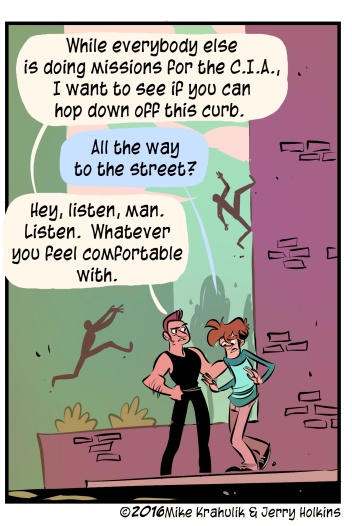 Jesus Christ. I thought for sure that as an "introductory class," they'd be taking it easy on us; that they would be incentivized to trick us into thinking it was something we were capable of. So that we would, like, come back.

I learned something very important. They do not care if you come back.

These mothertruckers only care about jumping over boxes and shit. I was there with my son, and I had imagined a universe where I sorta thought the two of us would be doing parkour, but at a lower resolution, because he was a child. Like how parkour would be on the Xbox One. Right? Still parkour, maybe missing some of that vertical resolution. But they separated us at some point, and I never saw him again until later.

But it turns out that the way kids are normally is already fucking parkour. You don't have to teach them shit, they're always trying to fucking kill themselves. Not me. I'm always trying to stay alive. Eating stuff. Avoiding danger. Breathing in, and - crucially - breathing back out. I sure as shit don't go outside and run when the fucking sun is out, and I don't crawl through dirt and get cut and bleed on myself while lithe elves writhe and gambol.

Eventually I found myself able to smoothly traverse various obstacles, at least, I think I could. You'd have to ask someone else. It might be Stockholm Syndrome.

After like forty five minutes of this shit, I couldn't see my son Elliot over there anymore. He had found some kind of manual for a lumbar support belt and he was reading it underneath an awning kids were jumping off of, taking shelter from a nonexistent rain. I said that what he was doing was not parkour. He pinched his brows together. "It's parkour for the mind, dad."

I struggled to maintain my rage.