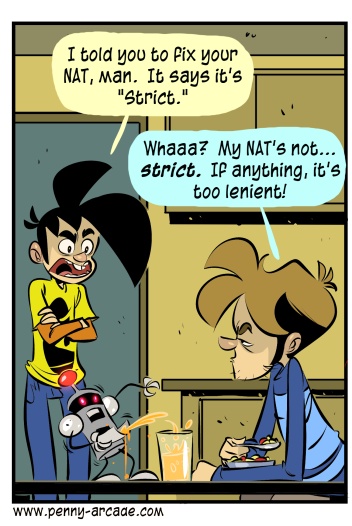 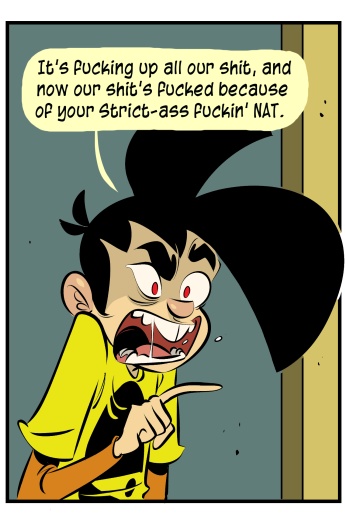 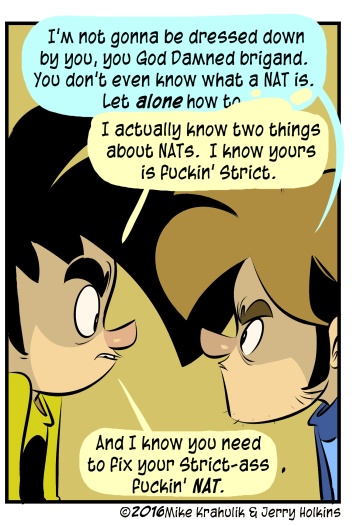 We were part of an ADSL Pilot Program in Spokane, back in 98 or so, and I would say that ever since then I have had to contend with Gabriel's fragmentary understanding of the network that literally makes our lives possible.

Anyway, I fixed it! Whatever! I know about ports, gah.

I tweeted recently; I'm a tweeter. Specifically I tweeted about something called an "eero," which is a… hm, what is it. It's a router, I guess, except three of them come in one box and they're all the same. It would be like if routers grew in bunches, like grapes, and you could pick them. In any case, the company that makes them apparently saw the tweet, asked if they could send me one, and I did not refuse.

The reason I was interested in eero was because I've only had middling success with other topologies trying to get Internet everywhere in the house. The cable comes into the office, which is nice and I like that, but the bedroom is at the absolute furthest point from it. What's more, my house is made up of walls and other supporting structures that occlude and shape the space. I don't know if it's like that where you live. That's what I'm dealing with. I bet the wifi in a yurt is pretty fuckin' sweet.

You set the network up by installing an app on your phone, which then leads you step by step through the setup process. You plug it into your cable modem first, into one of the two built in ports. The app uses Bluetooth to do the local work, and your phone's data to handle the rest. I would talk about it more, but that's actually it. I pulled a hunk of networking shit out of there that was really nice, a huge Linksys thing, with a cluster of pointy antennas on top of it that made it look like an elk. The new routers look like giant mints. Like, mints for a Giant. Either way, I guess. They both work.

I only ended up needing two devices for the mesh network to hug the entire house with data. There's three devices in the box, which I guess is why it costs like $500 at the store. You are gonna feel like a goofball if you buy this and then only use two of them. I guess you could give the other one away? Anyway, that isn't even the story. It's something to keep in mind about the expense but it's not the story.

The story is that something got fucked up with the wifi hardware in the Xbox One, which made watching The Great British Baking Show downstairs incredibly difficult. At this time, The Great British Baking Show does not come preinstalled on the Xbox One, which is something they should remedy. I was also very drunk. I don't remember the details: I feel like alcohol was involved somehow. Somehow it got on or near my mouth and that was the result. And I was still able to get that machine online, wired into the back of the eero, and extend the network to the new router via the app. So. If you want a network you can set up on a barely human fraction of your potential, you might consider this one.