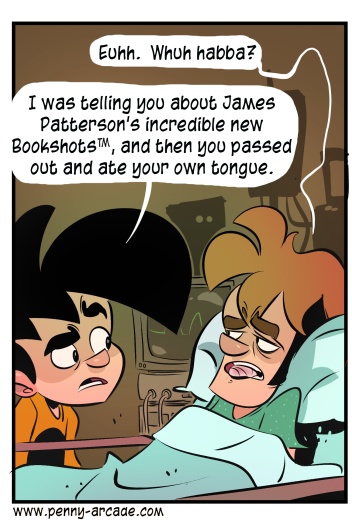 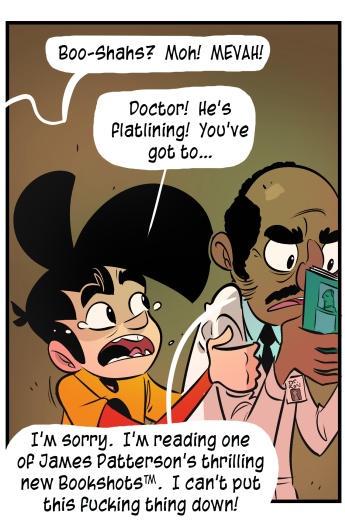 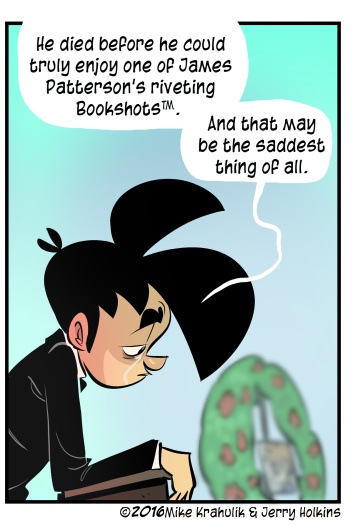 James Patterson, as has been established, is a necromancer. And he has only begun his dark work.

Well, maybe. Have you heard about Bookshots?

In the same way Nike branded the calorie with Fuel, Bookshots are an attempt to brand the novella as a form. I'm not neutral on the subject: I think the novella is a potent form factor. Nine Princes In Amber and many other rad, classic books fit comfortably in a space that the traditional publishers don't give a shit about. Their optimal scenario is the Book As Word Loaf, a hardbacked rectangular volume that demands its place in the culture. By which I mean the retail shelf. And the premium that commands.

It's hard not to think of it, in some ways, as being of a piece with initiatives like his own JIMMY Patterson or Jon Scieszka's Guys Read, literacy engines which… I don't know any "guys" who don't read, but so many groups are straining themselves to fix this that it must be a thing. I have a "guy" in my house, a small one, that prefers books to people. If a person preferred Overwatch to reading, though, I guess I wouldn't entirely be surprised...?

You can purchase Bookshots in slight volumes - the fantasy is that, in the manner of a tubeworm, they might live in environments that have been hostile to other kinds of literature. You can grab them as ebooks as well, but there's also an app which I have downloaded that is basically a frontend for these things. There's a free book in there called The Witnesses that I started reading but quickly determined it might not be for me. I can't even read a Beach Book on the beach. I will sit under an umbrella and read an entire Numenera sourcebook cover to cover, so I'm definitely not in the crosshairs of this initiative. Is the actual problem with books that they are too long? Is that really the "why"? Bookshots might work then, even if I don't like the word. But if he ends up creating a cultural space and a business case for the novella as a form, I mean, I can't not love it. It makes me want to write one, frankly.

Obviously he's my blood-foe, we've warred for millennia. But I'm trying to figure out if there's such a thing as a good necromancer. Maybe so; maybe so.