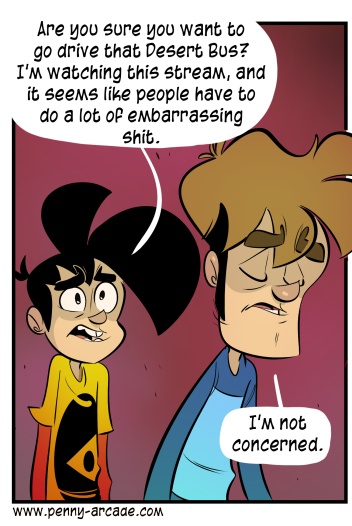 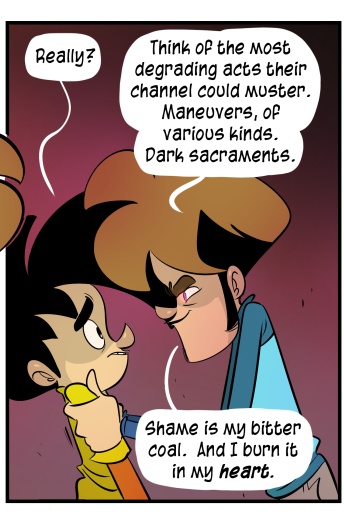 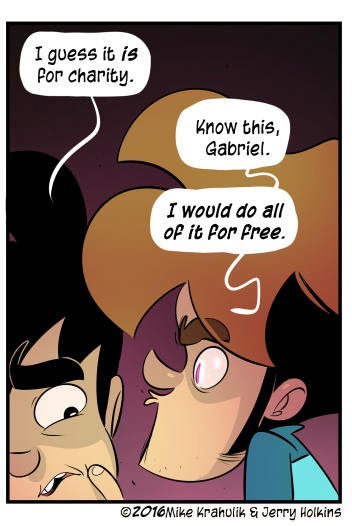 Desert Bus is an Internet Institution; it's nice to know that even on this unruly young Web, a global, perpetual collision of thoughts, there exists such a thing as tradition. Ten years in, and they've only condensed their hearty broth: on many occasions, and for many years, a sickly world has been made plump.

I've called in to the big drive before, and, you know… linked things, but I've never made it up there to the real deal. It is very small. At least, the part which the camera sees. The everything-else part is a Keeblerian joy tree, an impossible place of magical industry that chirps with elfin song. I came prepared to cavort, to engage in raucous cavortations, and I did what was asked because I was literally born to.

I usually try to stop by the area of PAX called Bandland, if you've been to the show you probably know where that is: if there is an Internet person or a band you saw the night before and you want to be best friends, that's functionally their Land. I wanted to talk to Graham and Kathleen while they were at the Aus show some time when we weren't on a panel together, just to switch things up and be people, but the line that projected out from their booth went back as far as fire code would allow. I like to think that it did continue on from there, but as some kind of infraline; a line invisible to the naked eye.. And when the front of the line was serviced, pop here comes a person springing up out of two dimensional space, like reverse origami. I saw Graham at the end of the show and I was like, man, I woulda come to see you, but everybody loves you too much. And I get it.

So, yes. I want to thank Loading Ready Run (Pronounced "Lurr-Rur") and Desert Bus (pronounced like those words) for driving on through the night, for building a powerful community that they delight each year, and for directing an effort like this toward the work we do at Child's Play.