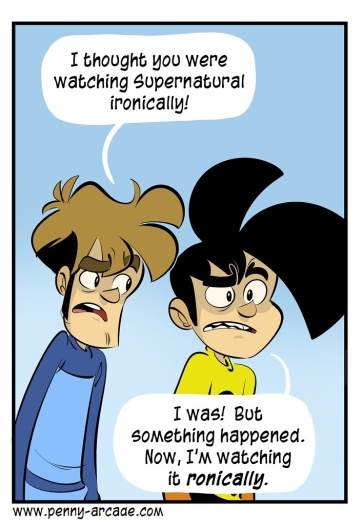 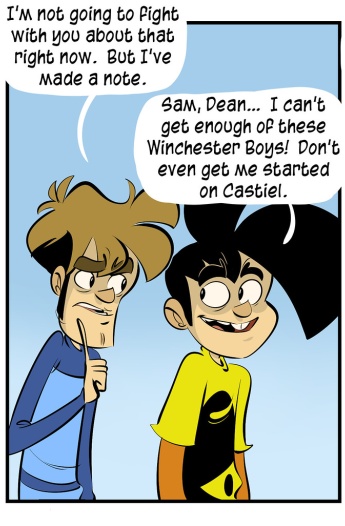 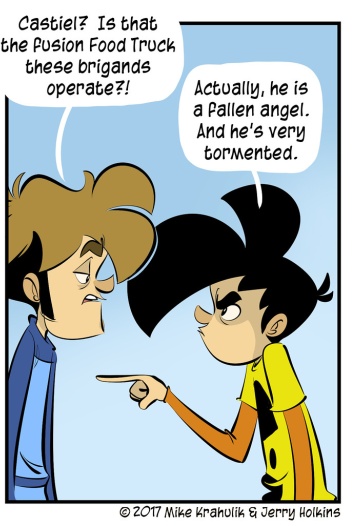 One year at PAX Aus, Kristin (whose work you absolutely know from PAX and Child's Play) was splitting a room with Kiko. Whenever she was not ensuring the utmost experience for attendees, she was shotgunning episodes of Supernatural. The more I tugged on this thread, the more I discovered that… Supernaturality was everywhere. And its agents were implanted deep, deep in the office.

But now, Supernatural fandom has infected young Gorbiriel. Only I have remained stalwart and true. I exclusively enjoy cool, great shows, like the old Buck Rogers and SeaQuest DSV. In Buck Rogers there was a robot that was always saying "bee dee bee dee be deep," and there was a spaceship that was like a falcon/spaceship kinda thing. SeaQuest DSV features the sea prominently, a context long known to be associated with romance, mystery, and exploration. I was going to add "Max Headroom," to the list but it wouldn't have functioned in this construct because Max Headroom is actually fucking rad.

I try not to be a yum-yucker these days. And I literally don't know enough about it to even denigrate it properly. Imagine that I am making an internationally recognized, non-denominational gesture that means, at root, "wev ydy."

Hey! I mentioned it before, but via some celestial conflux, my D&D group Acquisitions Incorporated: The "C" Team was invited to play on the big Stream of Annihilation thing Wizards of the Coast is doing. It's like two days of D&D shit basically, and you can absorb these spores through your eyes right on their Twitch channel. Our shit kicks off at 12:30 PDT, which is in… a couple hours. I should probably drive over there? Maybe?

I'm gonna drive over there.