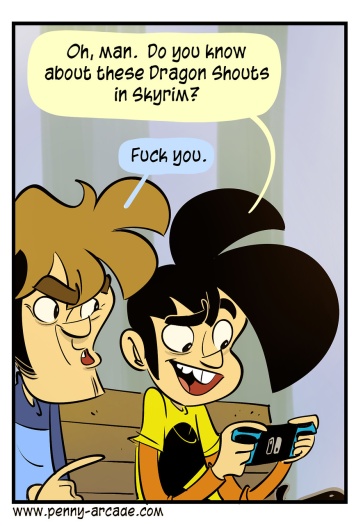 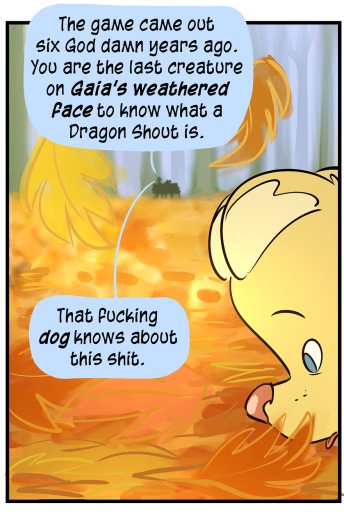 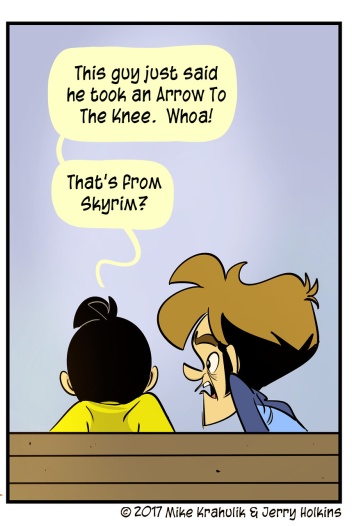 I can recall years and years ago trying to get Grib into Oblivion, back on the 360. I prepared the scene the way one might craft a Date Night scenario. I considered candles but did not execute. I don't know if his literal arms were folded but his spirit arms, The Arms Within, were laced before him in a defensive posture.

He didn't make it out of the prison.

Let's fast forward now. There is a sound like bloodle-oodle-oop, and ghostly lights flash. We have just returned from the first PAX Unplugged, which I think it's safe to say is his favorite PAX and he might not be the only one. I used to have to pig wrassle him into board games and now his first one is gonna be out next year. He loves RPGs now, as well, digital or no. He knew he should like Skyrim, and to his credit, he's always felt the appropriate shame. He's made the purchases and then bounced off, penance has been paid. I think he owns it a couple times! That'll learn 'im.

People approach this scale with varying levels of aptitude. Our friend Amy, who you may know from The "C" Team as inveterate repper of the natural world Walnut Dankgrass, doesn't really play them the linear path "right way," and I think learning that you could just "play" in there gave Gabe the license to get at this massive space without constantly feeling like a failure.

This, coupled with the ubiquity afforded by the Switch platform, has given him entre - however long it took - into a place I never thought I'd be able to join him in. I'll give him shit, or whatever. But I'll take it.

Hey, so, Black Friday has already shaped up to be incredibly expensive for me personally. But let me see if I can tempt you with some of the awesome stuff our designers have been working on:

We've got fully one thousand Double Secret Boxes, refreshed with the delights of this ongoing medium. We are reclaiming the phrase "what's in the box" with these head-free, inedible morsel-equivalents.

Our new designer Dora is comin' out swinging, dropping a D&D 5e rules update to our older Shame classic with I Feel Shame 2.0!

At long last, Dabe's Acquisitions Incorporated hoodie fantasies have come to grim fruition. Well, not 100% grim, because the embroidery on the back of this motherfucker glows in the damn dark. That's whimsical for real. As a special prize, you can get a free foam finger along with your hoodie order for precisely zero dollars.