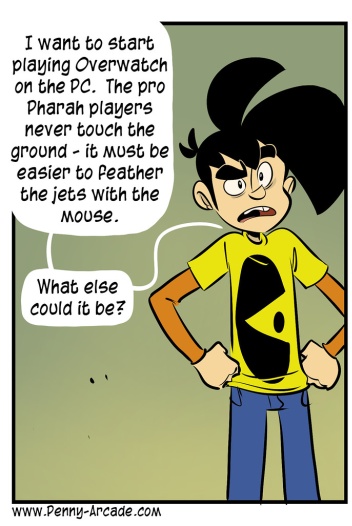 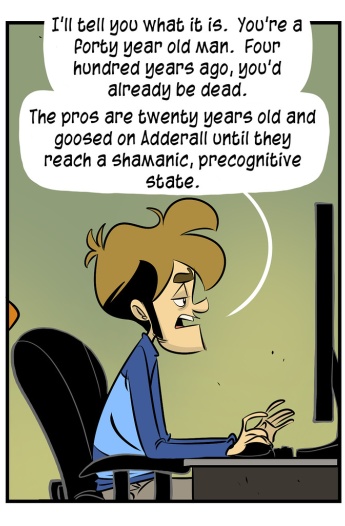 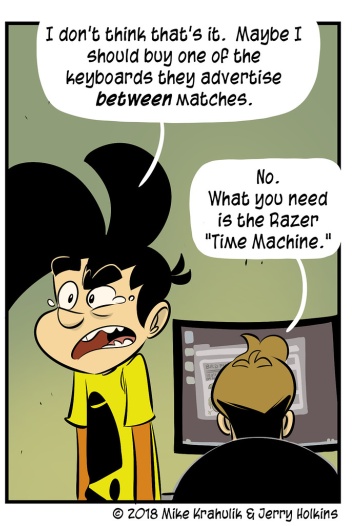 When I'm playing pubji with Kiko, I take painkillers constantly. Like, in game. The inventory item. It helps me get my head right. In the state of preternatural clarity they create, do I occasionally shoot a bush that looks (at a certain LOD) like it might be a crouching man? I won't say it doesn't happen. Maybe the bush in question didn't deserve to be shot, per se - but let's be honest with one another.

There is no bush without sin.

The first panel is truly what he thought, before Amy Falcone - also known as Amy The Falcon, or Walnut Dankgrass - dropped some science. Namely, that's it's cool to get - and, crucially, stay - super high on ADHD medication so that you can float just ahead causality's frothy wake. Except it's not completely clear to me how widespread or "cool" this is. There are a few articles out there about it in CS:GO, but many of them seem to be referring to the same interview; the interview let to substantial fallout and adoption of ESL policies and apparently testing…? It's pretty opaque honestly. The Internet is surprisingly bad as a device for finding information sometimes.

I mean, if you told me that young men were taking drugs for any conceivable reason I would be likely to believe you. As an application of Occam's Razor, I think it would be a robust framework to explain a lot of what happens on Twitch.

We did a sponsored stream for a couple games from Gigamic that I keep forgetting to post - I remembered this time. It was for a pair of games, a cooperative/competitive shipwrecked game called Hellapagos, and Yogi, which is like Twister with cards. Frankly I think it's one of the most entertaining streams we've done, sponsored or no, particularly with Hellapagos as it got very political very fast. It's a chance, too, to meet Patrick Groome who handles our social media shit with aplomb. You should watch the Yogi part mainly because it's fun to watch the very serious Kiko Villasenor suffer under the weight of it.