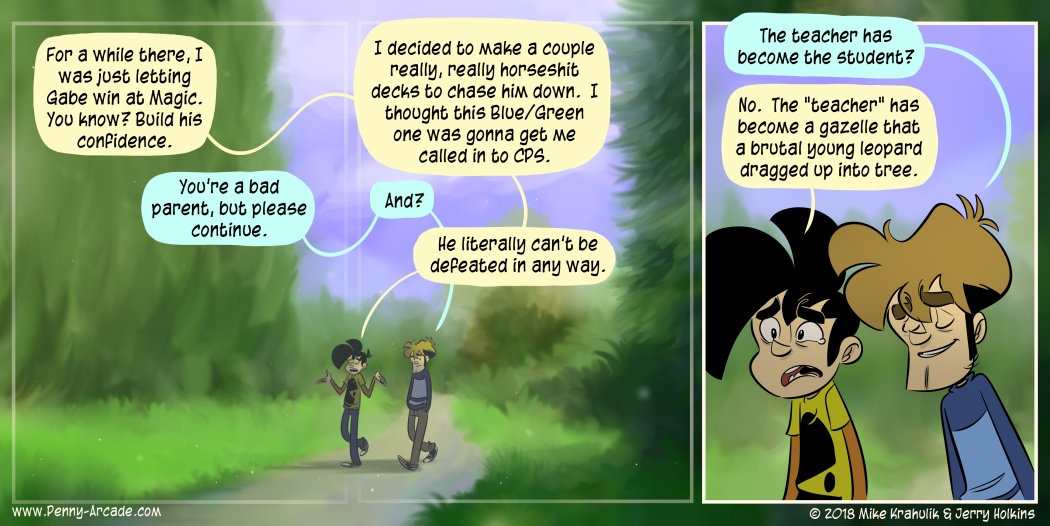 Magic comes and goes around here. I mean Magic: The Gathering, specifically. Obviously the mystic winds shift as well, this way and that, toward, and - terrifyingly - away from the worldseed. Thus are the epochs of men defined.

The condition usually spreads through contact in the home, and that's what happened here: youth typically start on something softer and move into the hard stuff. There is a land beyond Hearthstone, and it has something called The Stack. Among other things, The Stack means that you can do things, rude things, on your opponent's turn. Which means you have a reason to end your turn with a little mana left. Which means, among other things, that these two games are only very, very superficially comparable.

So now both Gabriels are playing Magic against each other and I understand it's gotten thoroughly real. I couldn't tell you if it was true or not, I may not even be equipped intellectually to know, but playing Magic against someone always makes me feel like I'm competing against the physical weight of their brain with mine. Between building the deck and the fairly sophisticated order of operations puzzles that generate optimal play, it can feel pretty bad to lose sometimes.

For whatever reason, games like this never got popular at my house. We play competitive games, but nothing with that texture. There are are games I've been playing against Elliot since he was five or six and I've never won once. We can always tell maybe four turns away. We laugh, and laugh, and roll around.