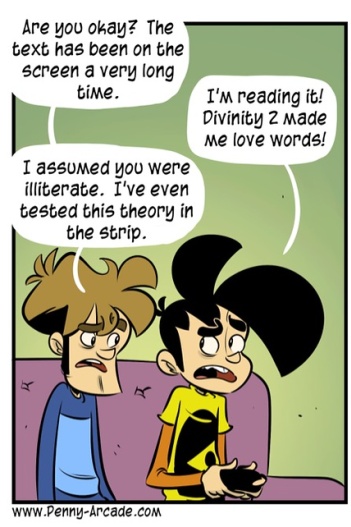 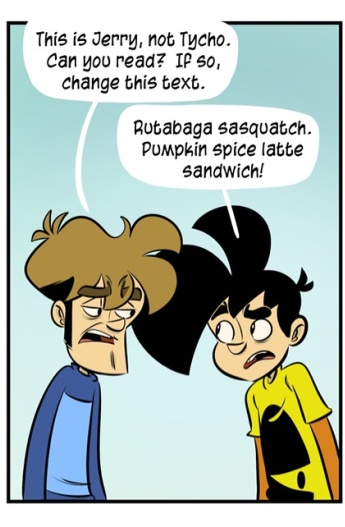 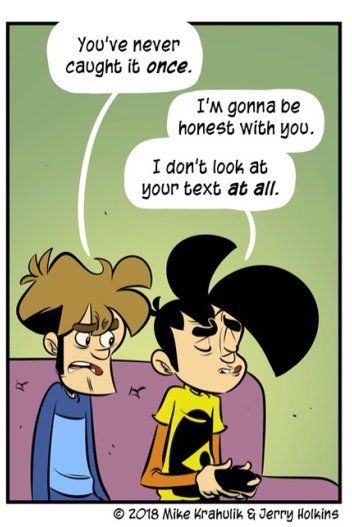 Gabriel's experience with RPGs is a smattering of potent imports from Japan, the occasional Dragon Age game, and Mass Effect. No Wizardry, no Ultima, no Bard's Tale, no Gold Box, and certainly no Baldur's Gate - the inheritor of that august fraternity. No classic Fallouts. And no Planescape.

What I mean to say by this is that the literary branch of the RPG typically constrained to the PC is not really in his experience. It was once a point of contention: as proof, I offer a comic strip nearly old enough to vote. So when he told me he was fuckin' playing Divinity: Original Sin 2, not merely an RPG but literally some Kickstarted Euro CRPG type shit I assumed I had misheard him. I tried to imagine him rubbing his beard, nodding sagely as he scooched a mouse the couple millimeters between two savory dialogue options.

Alas: it had been released as a Game Preview/Early Access thing on Xbox One. This is generally a dangerous proposition, this kind of state change, and the genre is practically ozymandian with its partial monuments and eroded legends. I have no complaints to speak of as regards the implementation here. This is legit.

When I talked to him the next day, he was like, man. I love Pillars of Eternity II. And I was like, yeah? I thought you were playing Divinity: Original Sin 2. And he was like, oh, yeah, that's what I mean. So, you know, we can't say that he's a full convert just yet. But.

He was trying to compare it to his previous experiences in the genre, and they don't map. He's never had the sensation - not at this resolution - of a game whose execution is broad enough that it feels like you're engaging with a bottled intellect. You can drop a stone in this game and it will be minutes before you hear the splash.

I have started and stopped the game many, many times, because I know that to properly play it would be to play it co-operatively. Because, yes: the game I just described to you can be played in multiplayer. Never in a million years did I think I'd have a chance to play it with Mike. I never thought the world would turn in such a way that he'd been able to appreciate Chris Avellone with me, but it did.

This last sentence was originally an entreaty to purchase Lexcalibur before it was sold out, but it sold out in the time it took me to write this post. I had a lot of meetings about a lot of cool stuff, but it took a while and now the physical copies are gone. We do have digital copies and the audiobook left! I don't think they can run out, but I wouldn't know. This has never happened to me before and we're in terrifying new territory.