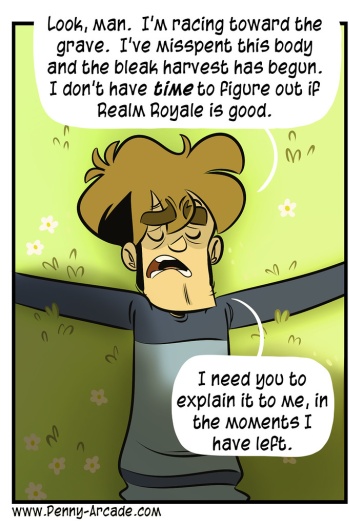 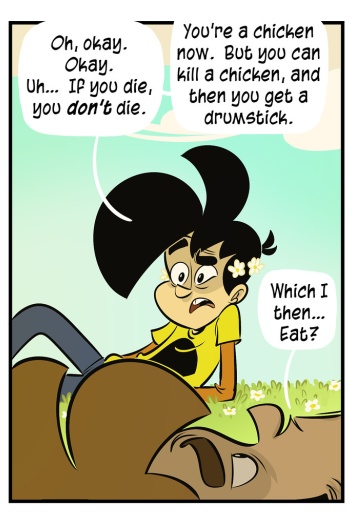 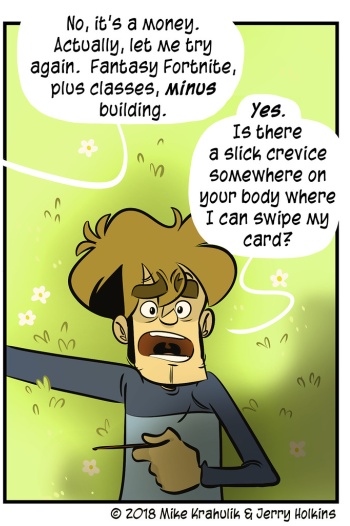 One day there may be an apparatus designed to fully articulate the moment a trend becomes a genre. Recall that shooters were called Doom Clones, for example. Until this machine is constructed, perhaps from a sliver of replicating extraterrestrial alloy, let's try this: a trend becomes a genre when the "clones" start getting really, really cool.

Realm Royale is another one from Hi-Rez, a company which has a knack for approaching genres as they are red-hot and finding a way to spin them. I liked their take on Tribes, also. Both of them. Also: Paladins Strike just chirped on my phone, inviting me in for a game. I might take them up on it, when I'm done here. I don't play Smite, but I watch Smite. When did they come to own so much of my time?

You sort of know what Realm Royale is from the jump: it's a battle royale game. Like we say in the strip, it removes building and adds classes in the manner of a "hero shooter," with some RPG frostin' like armor going in specific slots and class abilities, all tied into the genre's incredibly engaging loot phase. The game is so much about class interactions that they don't even have a solo queue. It also has the most varied, most interesting map I've seen in the style thus far.

Josh tried to jump in and found it jank, and I understand what he means. This is an alpha that came out yesterday. This is an information bundle that communicates the same kind of information as warning stripes on a venomous insect. The game in this youthful state is like a glass frog, you can see everything right through the skin: there's a grayed out Battle Pass menu item right when you load it up. Every aspiration is exposed.

These ideas are already great, the game is already fun, and I'll say the same thing I did about Fortnite before Drake played it, before it was anything but Exhibit A in a conversation about the morality of cloning a design: this game can be as big as they want it to be. It has that in there. Now it's simply a question of what they're willing to undertake.