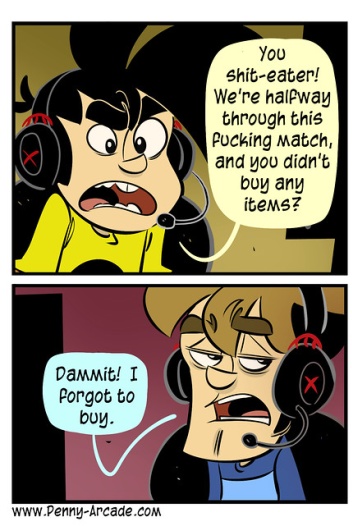 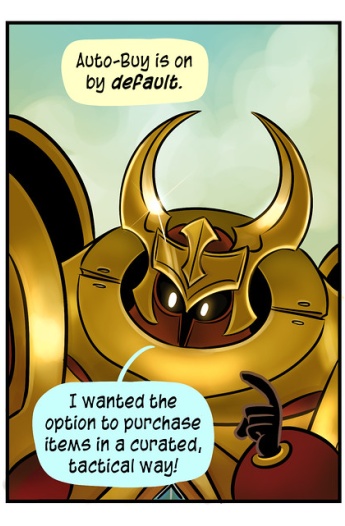 I got blown up over it in chat; I'd bought the Battle Pass with real money, but I hadn't taken the time to purchase any items between rounds (LOL or DOTA style) with pretend money, which was an irony too great for their mind to contain all at once.

I got destroyed as Khan (pictured with hilariously small hands in the second panel of the strip) so Gabriel was sure to render me thus. Paladins keeps showing up in the strip because I play Paladins every night. We ended up pulling a friend of Dabe's in one night, and his progressive revelation over the course of a couple rounds was much as ours had been - we slept on it.

It looks like it's gonna be Overwatch with the serials filed off, when it's actually a completely batshit remix of MOBA tropes. The thing that may draw your interest as the sort of upper echelon dork that reads Penny Arcade is that the characters start one way mechanically but they don't have to stay there. In addition to choosing a specialization at the beginning of the round, you also choose a hand of five cards you've configured. You don't play these cards, it's just a metaphor for how you alter your character's base abilities. So my version of this Healer is going to be different if I'm main heals or if there's an off-healer that's going to be filling in the gaps, and I have them both set up. There is more "game" there to fiddle with, and it's hard to stop. You always wonder if you can eke out a little more, and the only way to find out is to build and test, which means playing Paladins. It's similar to my old Chromehounds loop and I love it.

Doki Doki Literature Club is BACK, today on the stream at 2:00pm PDT. Join Ryan Hartman as licensed scoundrel Tommy No-Chill, Joshua Price as Old Tom, looking back on his life from a slight remove, and myself as every other entity in the game. I'm pretty sure Ryan and I are just gonna stay playing these Dating Sims; the only question now is whether we want to fuck birds or dads.