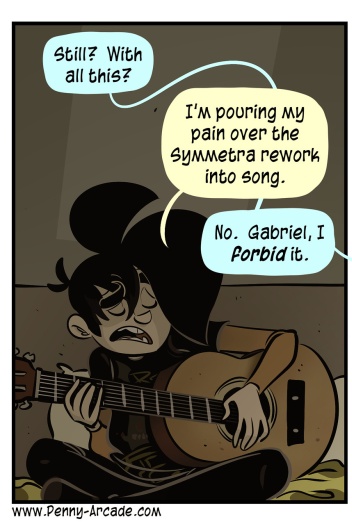 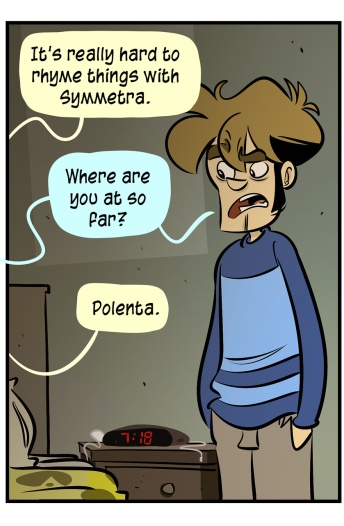 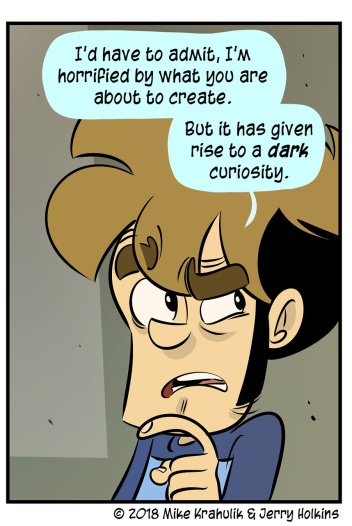 When we were writing the strip originally, it was on a completely different topic. But when the topic of the Symmetra rework came up, it was clearly like I had jostled a sore tooth. I decided that these perpetual torments might be a superior topic.

Symmetra says her own name "SIH-meh-tra," but I don't think I've ever heard another person say it that way - everybody else seems to say "sih-MEH-tra," which is how you end up where we did in the comic. The agitation on his part is real, though, and I've experienced similar things; there's a kind of Higher Aesthetic Blizzard aims for, a big idea, a kind of systemic unification that they're willing to work toward no matter how rough it might be in the interim. Their track record suggests that they do arrive at a kind of equilibrium that most people can live with, given time. As somebody who makes things also, even if they are much simpler, I have to respect the willingness to break things.

We should be wrapping up Doki Doki Literature Club today on the stream at 2:00pm PDT, very close now. Witness Ryan Hartman as emotional highwayman Tommy No-Chill, Joshua Price as Tom The Elder, and myself as the Visual Novel equivalent of the Greek Chorus. I'm gonna install Hatoful Boyfriend on that box this afternoon, and depending on how long it takes to wrap up DDLC, today might be the first episode of Birdfuckers, Inc.