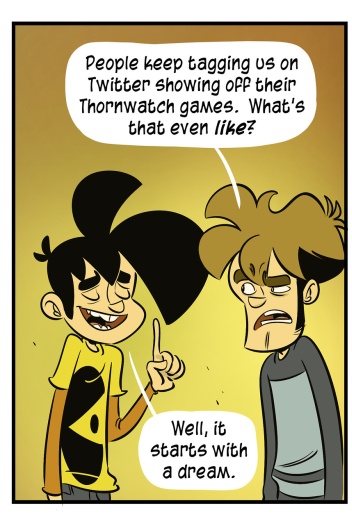 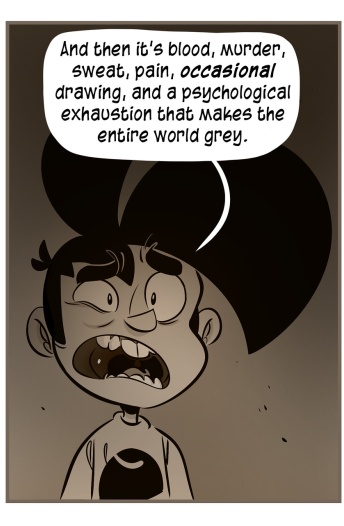 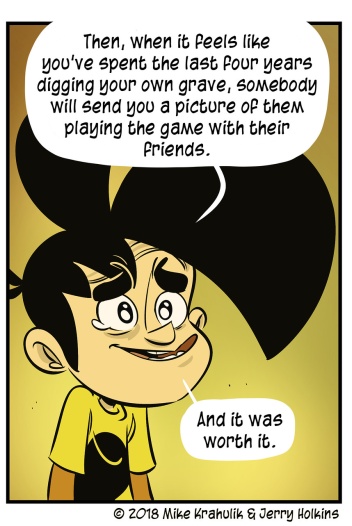 There are all these different thresholds you cross in an endeavor like this, and the newest one for Thornwatch is that preorders for Thornwatch: Eyrewood Adventures go up on the store tomorrow, July 10th. They should ship at the end of the month, after the international games have hit distribution from the Kickstarter.

Expressions of unbridled positivity are not generally in his wheelhouse, but as we were putting together the text for the strip those words came out of Gabe's mouth and I caught them in midair, placing them down in the document gingerly, as you might a soap bubble.

Tomorrow at 2:00pm PDT, you can join us on stream for a mission or two of Thornwatch, maybe even some of the Dark of the Wood content. You should come get some of this! I was going to say "we'll see about doing a Thornwatch giveaway," but then I realized that literally every aspect of this decision is entirely up to me. So we will!

This afternoon at the same time, Ryan Hartman will reprise his role as Human Woman Thomasina No-Chili, Josh Price will be her troubled, avian obsessed conscience, and I will be many other birds on stream as Birdfuckers, Inc. - an elite birdfucking cadre. My friend Amy Falcone was talking shit about our bird choice, but we're not even after that bird - he's only a stepping stone so we can get his brother. That's how far ahead we think: as the only publicly traded bird fucking corporation in America, we have a reputation. A reputation and a damp, even subterranean desire for avian filth.