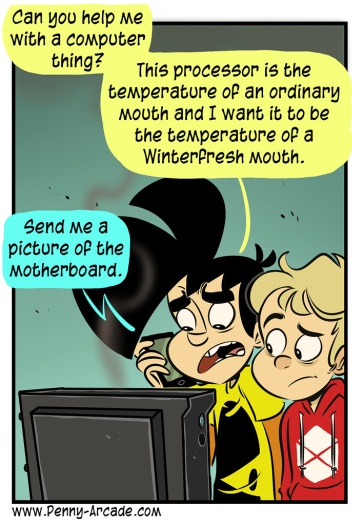 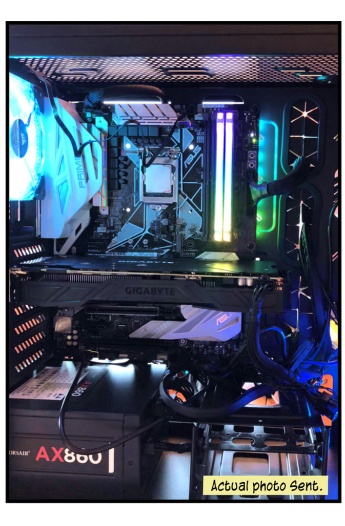 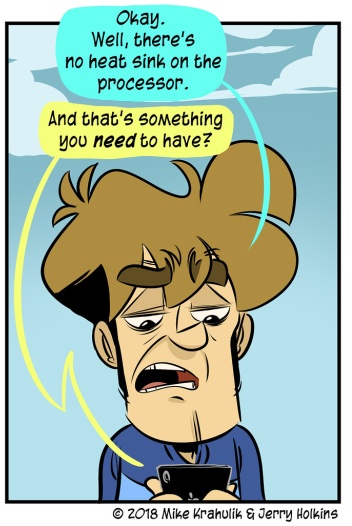 We knew that including the actual image I received in the comic would provide delight purely as a hidden object game, but I wasn't a hundred percent prepared for how viscerally people would feel it. In the past, I've either helped him build a computer or he's bought them online. This one isn't even technically for him, it's for Gabriel the Younger, and they put the whole thing together… together.

I try to adhere to a robust moral praxis, but I can't pretend not to be mesmerized by case lights that sync with your mouse, keyboard, and headphones. I consider it a personal failing that I am unable to resist them. But Gabe sprang for the fuckin' RAM with the programmable lights on it, and I'm so glad. It's like the really nice LEGO sets - let's say, purely as an example and not as a very specific, perpetually renewed coordinate of desire, Metalbeard's Sea Cow. I love this shit but I could never buy it - I know the very moment that my resolve slips it's not gonna be one set. But Mike can buy it and I can enjoy it without feeling that I've somehow let down the woman in the Great Depression photo.

Anyhow, lots of streams today: the Design Team is gonna submerge themselves in fish-based horror at 12pm PDT, and at 2 our Technomancer and I are going to hack even deeper into Zachtronics' crafty, clever EXAPUNKS.