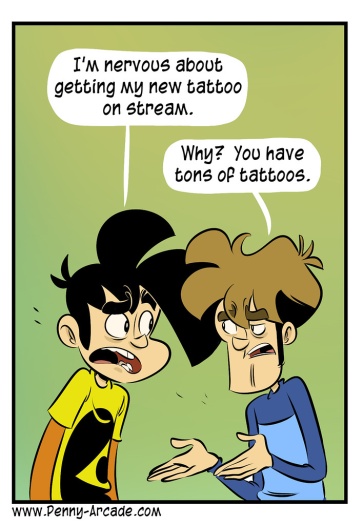 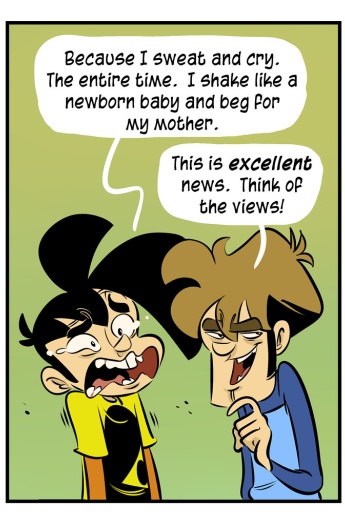 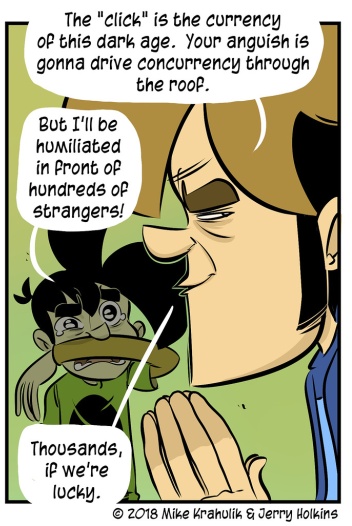 Mike and I receive Tattoos very differently. This fact is discussed in today's strip, but there is another way you can become acquainted with it, and that is to watch the video embedded tastefully below these words. The tattoo artist terminology for someone who takes a tattoo in this way is "A Box Of Cats."

I have a different reaction. Which is to say, not much of one. I'm nowhere near as entertaining as Gabe is. I "go remote" when subjected to various kinds of stress or trauma, I think the term is Depersonalize, so there's a little attenuation when it comes to response speed but generally I can endure all kinds of deeply unpleasant stimuli while retaining a functional (if throttled) consciousness. It's probably bad that I can do this? Who knows. The alternative was madness.

A couple hours in I found it pretty unpleasant, but by then it was almost done. Tony Touch (a good friend of Dabe's) is really, really fast which doesn't hurt. Or, hurts less?

Of course, Mondays have streams all day really, starting early with coding streams and then moving into Noon PDT with the designers playing horror games, but Ryan, Josh, and myself should be wrapping up Dream Daddy today - deciding which dads will remain mere diversions and which dad will receive the royal jelly and undergo the transformation. That's just I guess. I've never fucked a dad IRL and a lot of my information may be incorrect.