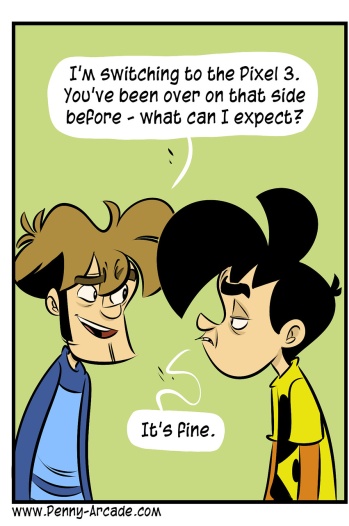 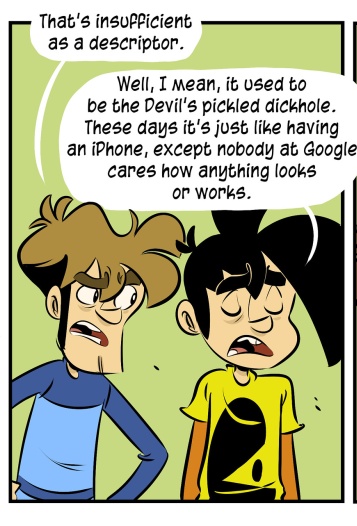 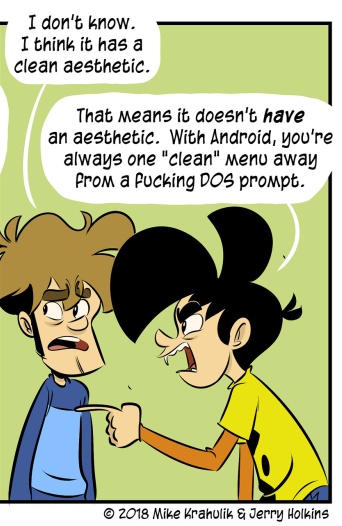 Gabe oscillates at two to three times my rate when it comes to a hunger for technological novelty. I'm not without the hunger entirely, it's just that I don't… Hm. I don't see it? I can read a comic book without ever looking at the pictures. It drives him nuts. I don't need them, though, and they're not why I was reading it. It's like this with tech also: I have a purpose, and the device enables the purpose, but the middle section is like the second step of a sequence that culminates in Profit. There are a lot of question marks and unless the process is truly excellent - the work of Panic comes to mind - I don't perceive it.

The strip gives the Gabriel review of his Android experiences, which seemed "perfectly whatever." I've mostly been waiting for Android to get just this side of okay to try it out for a bit, and I think I might have been too cautious actually, because I've had my filthy paws on a couple Android phones that felt as though they had arisen from genuine consideration of the form already. Most of my experience with them has been trying largely in vain to make my in-laws' relatively shitty budget phones less of what they were.

Also, I just... really need there to be viable alternatives in every context, and I'm the sort of person who is willing to own, use, and even repair second or third choice offerings purely to forestall a diminishment of choice. I'm aware that purely by the numbers Android - which may even be a naughty word - stands astride the earth, its dominion absolute. But, like any tyrant, I don't know that it's well loved. I'll try.

I have a Pixel 3 showing up at the house by "end of day;" I could refine the range, but I don't have any entrails handy. Or I do have them handy, but I prefer that they remain wherever they might be currently. I'm also trying to rely less on dark wisdom, earned at the shining tip of a blade? I want to end 2018 strong.

But, yeah; the true poles I'm travelling between are something like "constraint" and "inscrutability" with this move, and I don't have any affection for the iPhone as a device, but maybe it's only because I've never given another phone the opportunity to abuse me at length. In truth, I'm running away from Apple. But who knows. Maybe I'll come to understand that Daddy only had so many rules because he loves me so much.