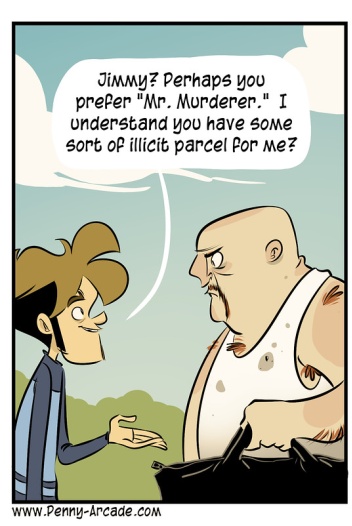 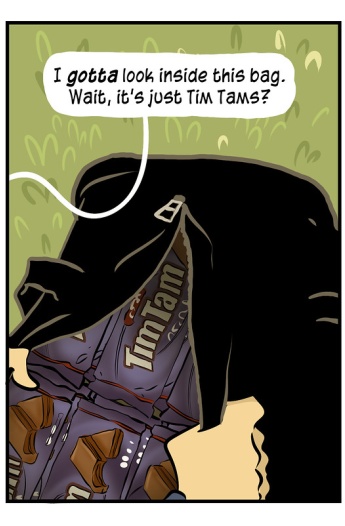 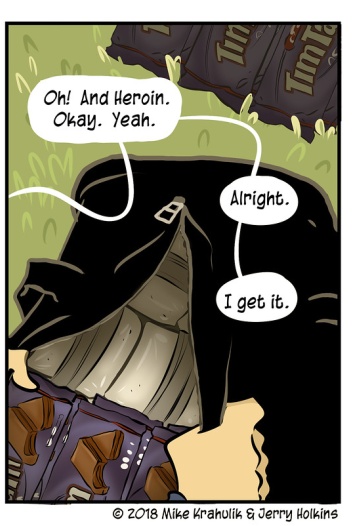 Our epic adventure comes to a close in this, the third and fInal comic of the potent Australiana series. Indeed, the only scuff on its gleaming surface is the fact that he's got Double Coat Tim Tams in the strip and not the caramel kind. Double Coat is strictly for deviants - this is well understood. So… maybe it's the right one for the strip after all.

It's 7:32 PM on Friday here in Australia, and I have a tiny moment to type this about before I head back to the show. I ended up getting here yesterday at around 6:45 in the morning with the incomparable Amy Falcone, after a fifteen hour flight where we discussed virtually every human endeavor and found it wanting. The intention had been to get here the day before, and have an opportunity to acclimate a little bit, but that did not happen because it was so foggy they didn't want to fly the planes out of Seattle. And then our crew timed out and we needed a replacement. And then the replacement crew was late. And so on. We got the message being transmitted from the diamond heart of the universe.

I lamented these facts, particularly the fog, in a tasteful, completely internal way. I said, within my cavernous skull, how foggy could it be? But then I saw how foggy it could be because I literally got fucking lost driving to my own house. So… don't fly a plane in that shit, maybe. Good plan.