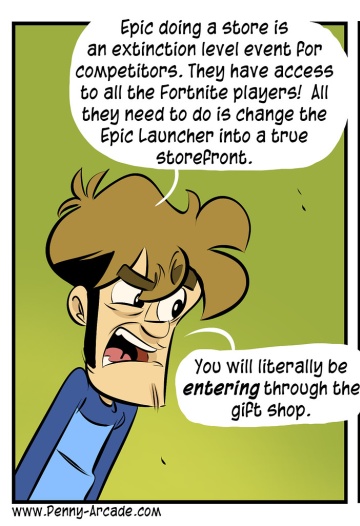 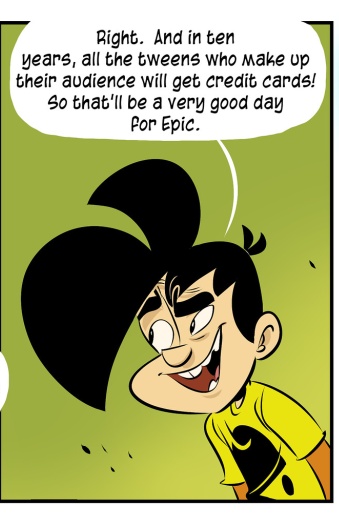 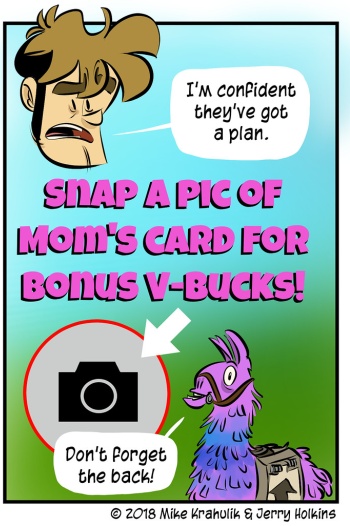 When we wrote the strip, what I said wasn't true - but when I went into the Epic Games Launcher just now to poke around for SuperGiant's new roguelike Hades, it looks like it?

They're not all tweens, of course. But it's non-zero, and if you haven't been to a kid's Birthday Party in the last few months you'd be forgiven for not knowing but Fortnite emotes are like a mind-virus with true dominion over the youth. In a maverick fit of iconoclasm, Gabe's son Noah performed these dances at PAX while dressed as Reaper.

I was deeply scandalized.

I think it really remains to be seen what type of vigor an Epic store would have; the "extinction level event" nomenclature is freighted with truculent ironicality. I understand that the percentage it's offering is better, 88 percent over Steam's retaliatory, freshly goosed 75. That's a larger percentage of a smaller number, and it'll be that way for a while. More interesting at least to my mind is waiving the fees for games that use Unreal Engine 4, and bootstrapping a broader Support-A-Creator program. I have a lot of questions, but it really looks like a good faith effort to me. Greater revenue share for the developer as opposed to lower costs for the consumer is such an interesting narrative; "moral consumption" has been the overriding modus for a while now. Steam's 70/30 occupied the lofty same position, once.

What it really means, as a practical matter, is that now I have a fourth or fifth store client on this box. The question at this point is really about which one is the first to be removed.