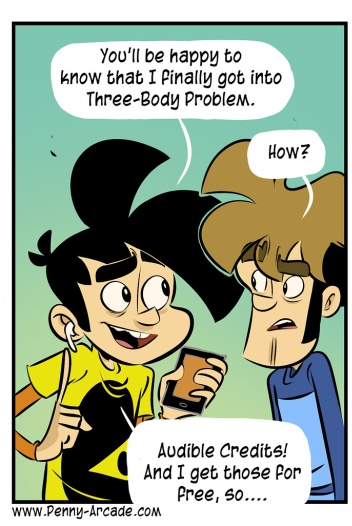 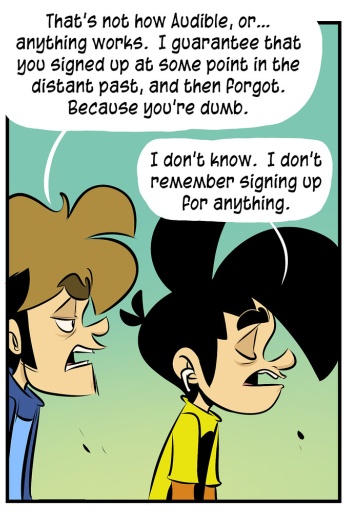 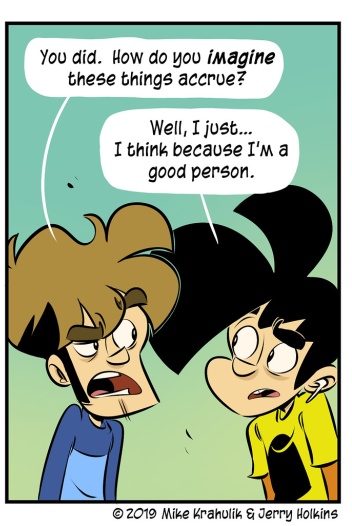 I push The Three-Body Problem on every-fuckin'-body. People usually say it dips in the middle and finishes strong, but I can't really agree with that - I think the story in general becomes something we're not supposed to fully understand. To explain why would be telling. But the first volume is legitimately substantial and I went after it like a porterhouse.

I pushed it on Gabriel for a specific reason: there is a concept in there that may be one most profound I've ever encountered in or out of fiction and I wanted to make sure he knew about it while also not wanting to tell him myself. I wanted the idea to arrive in its own time and context and then, just… pulp him. He finally got into it via an Audiobook, and I can't wait to see what he thinks of "that part," but when he was talking about the audio version he let it slip that he was privy to some secret, possibly sacred conduit that sprayed an unlimited amount of soothing, audible books. What follows is essentially our conversation.

If you want to be a little ahead of the common person, if you want to camp on the very cusp of the possible, I think you should invest some portion of yourself into Dicey Dungeons.

Designer Terry Cavanagh put a version on, like Crazy Games or something, ladeled over a chiptune version of Haddaway's "What is Love," which is a strangely appropriate soundtrack to a roguelike. I don't mean that one. I mean the one on itch.io, with the rad music by chipzel and the rad art by Marlowe Dobbe. It's similar to Rogue, but every class has a fundamentally different way of approaching the dice you roll to the extent that each class feels like its own game. It's neat and cute and sounds good and the boss I fought at the end of my run was a malevolent Girl Scout. It's young yet - like I say, you'd be ahead of the curve a bit. But I can't wait to see where it goes.

Oh, and for PAX South: you might recall that at the Unplugged game, Acquisitions Incorporated found its way to Ravnica somehow and now we have a suite of incredibly novel problems. Here's the info for the official South game:

That is correct: we will be matching with with inimitable WWE Superstar Xavier Woods, in the guise of weirdo, steampunk goliath Bobby Zimeruski. Hopefully he can help us spring Jim out of his current predicament, which could be described as "a dark nest of evil, ravenous saws."