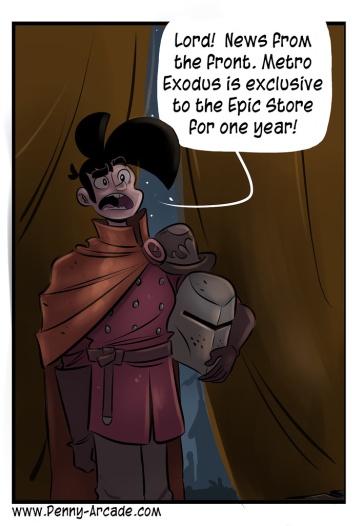 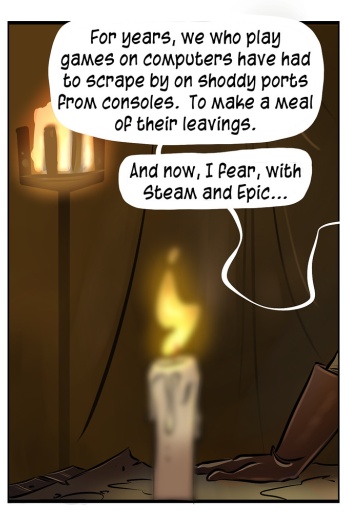 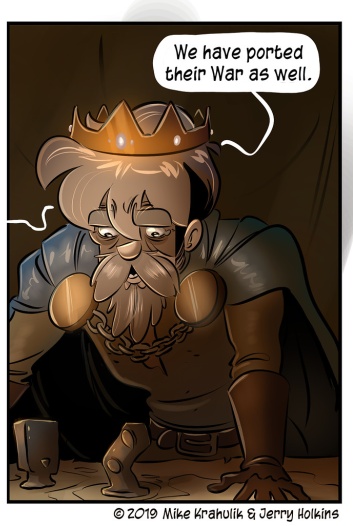 I feel like Gabriel reaaally had fun drawing this strip. I dunno! It's just the vibe I'm getting. Of course, while he was drawing it on the stream, he said that he feels compelled to draw extra hard when he finds the script lacking. But, you know, joke's on him: it's mostly his script. What do I do here? God only knows. I effervesce, you know? I refresh.

Another shot fired in the Epic/Valve store thing, this time via a one year period of exclusivity for Metro Exodus. I installed the Epic store so I could play Hades so I'm not immune to this dark force. I'm not cool enough to like Metro games - I read Roadside Picnic, does that get me any points? I never preordered or anything, or thought I'd be able to add it to my largely fallow Steam Library, so I'm looking at it a bit more dispassionately than some.

Fortnite enabled all of this really, and it's impossible not to recognize the pluck of it, in the same way real is said to recognize real. Of course, and only nineties kids will get this, but Valve itself utilized a prominent title - Half-Life 2 - to open its initial front in a different kind of war. That war, I think we can argue somewhat successfully, was to keep the PC relevant to developers. It's almost impossible to imagine now, but you bought things at stores then - stores who didn't really want to carry PC titles anyway because the single use codes made them inimical to a game shop's actual business, which was selling the same game repeatedly via a trade-in economy they owned tip to tail. At the stores I went to, a pre-order was functionally a requirement. They didn't give a shit, and why should they. I was less than a neutral factor. I was an active waste of their time.

Epic doesn't really have any option but to pay for exclusives, if that's how they think they're gonna succeed. If they want to be a market of record for games they didn't make, it has to be done somehow. Because whatever their royalty breakdown is, and it is more generous than the industry standard, it's a larger percentage of a smaller thing. That is what they admit when they cut these deals. I tolerate it when CD Projekt sells me Thronebreaker exclusively on their own store, but the third party exclusives just… set my jaw. I get it because I'm conscious and literate. But I'm not obligated to like it and I would prefer it were a phase.

Here are the innovations on the Epic side, as I see them, where I think there's a case to lean in. They're doing is what other newcomers to existing markets have done: create a moral impetus. This is like buying a shoe but then they send a shoe somewhere else. They are, in effect, trying to create something like an Organic label for entertainment software with their greater percentage. I like this, frankly, and not just because I know a lot of people who make entertainment software. The truth of that percentage is ambiguous, as I've already suggested, but still. Before there was a Steam, when we talked about Digital Delivery - a term now almost obliterated by the ubiquity of the practice - the hope was that by excising unsightly physicality we'd see price drops that never materialized. But here, at least with Metro, there's a ten dollar price drop on the Epic Store. In the US, anyway. Charting a course between those two things, though - superior returns and lower prices - I would say is less competition and more revolution. Right now I would say that the platform is very much in its misshapen, ungainly teenage years but I see potential in this kid.