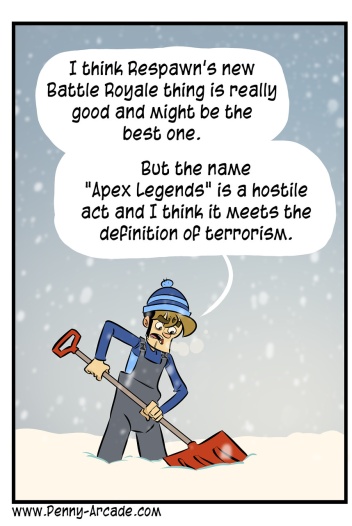 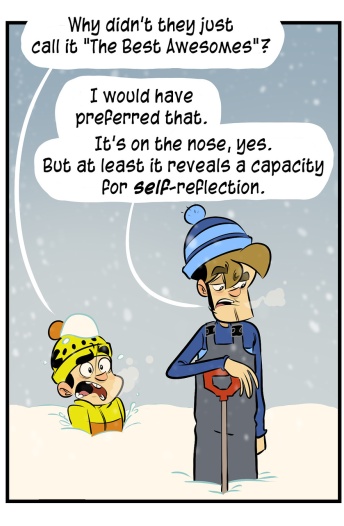 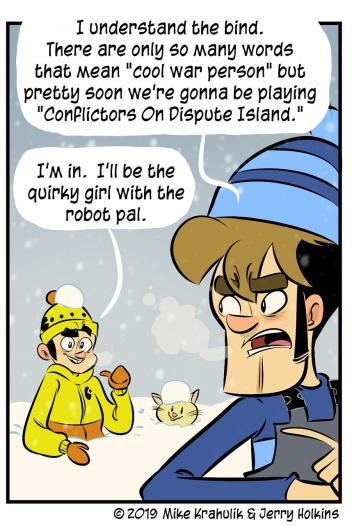 The only bad thing about Apex Legends is the name. And it's… You know. It's probably too late to change that.

Since we spoke last, I have played a lot of Apex Legends. I've won twice, which for me is such a statistical aberration that it makes me want to look at the checksum for the last few days. But I'm actually not bad at their shooters, for some reason. Well, not some reason, a specific reason: even if there aren't Titans, or the radical mobility pilots have even on foot, Respawn's thesis of gunplay is the most predictable, most immediate example of the form, which means I'm able to model it effectively. What I expect to happen happens with greater regularity. Thus, because I am able to trust the system, I play closer to the edge of my capability. Such as it is.

Dramatis Personae is, I think, the most annoying way to say it, so of course I'm drawn in - but yes, there are specific characters. I loved this in Realm Royale and the notion has only simmered and thickened here, grown rich. They've gone full-on hero shooter here, except the stakes are different: you form three person squads and we aren't trying to secure anything as abstract as a point. Even if their characterizations vary in tolerability, the mechanics that underlie each one make any voiceover sins irrelevant. There's characters I like to play, and there's characters I want to play alongside. Ults are designed to be used, not hoarded. You're clearly - and the timers convey this - supposed to be yourself, what you mean in the world, as much as possible.

"Death" exists in a range of experiences that offer deeply engaging narrative arcs. You can be knocked down, before you get taken out fully. That part is not weird. What's different here is that it's actually quite difficult to kill a downed enemy. They're fast and they flop around. In addition, there's a class of item called a Knockdown Shield that exists in various power levels that lets you hold up a directional shield to give you even more staying power. Let's say that you get taken out completely, though - it's not necessarily over. Your banner can be claimed by any teammate, and once they've done that any teammate can then respawn you - or the rest of their team - at stations helpfully designated on the map. These places also have crates by them, and this works two ways. One, when you return you're naked as a jaybird without any of your shit. Might be nice to have some stuff, and crates are a great solution. Two, it makes these Respawn things attractive to opponents also, especially if you see somebody drop into the map and you know for a fact they aren't armed with anything but their hopes and dreams.

I've played the game on all the platforms it's available for and I would gladly play again, on any of them. This is a game that wants to be played, and makes it easy, from it's incredibly robust Ping system that lets you communicate effectively even with a micless Ayn Rando to the fact that weapons and ammunition are color coded for easy looting. It'll even apply attachments you've picked up directly to a new weapon, or tell you what you have is already better. It wants you to play and it's not gonna sneer at you. It's not a test. It's a piece of entertainment software. If you want to know what makes this one different from the others, it's easy: it doesn't take your time for granted.