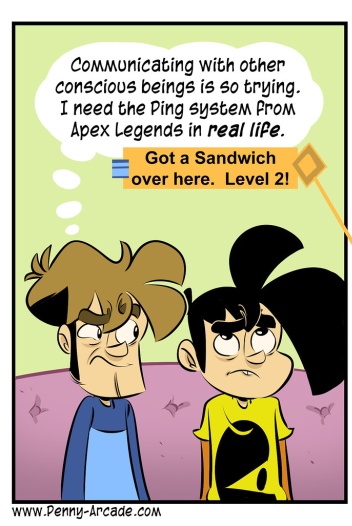 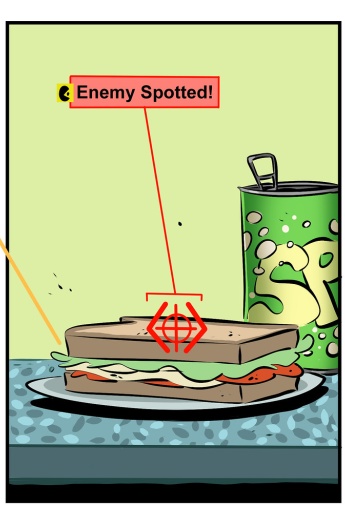 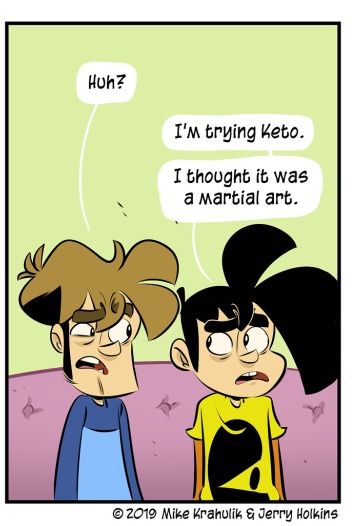 I was watching Ninja stream Apex Legends this morning, and the title of the stream implied that while it had previously been a sponsored stream, he was now playing it because it's fun. I mean, I think so too. We just made another comic about it. It's had twice Fortnite's viewers on Twitch since it came out, but of course that's two-fold; the dynamics are such that you can pay a person to play your game, but you're also paying them not to play the other game for a 2x perceptual swing bonus. I'll be very curious to see where this is at in a week's time. But, again: it's always worth remembering that royalty is a temporary condition. I have a theory that suggests these cycles of Fame to Famine are getting shorter, with more explosive crests and more subterranean falls, but that's mostly because it seemed weird to me how quickly they seem to reboot Spider-Man.

We felt like it was worth making a comic about the Ping system in Apex Legends, without which the game would still be very good but not as great. Because there's no real way to play the game Solo, as a "team" of one you're always being slotted with Randolina Jolie. I think this is the right choice, because the assumption that you're in a team creates the lattice beneath a host of the game's other systems. So, because others are a fundamental consideration, work to enable useful communication isn't an edge case or an "if we get to it" consideration. And they've simply murdered it here: you can communicate a host of sophisticated information about enemies and items. You call items out with useful information about their power level, and you can even say "Yes, that's an item I want" or "This crate is open and I don't like that because of what it represents." It's very robust. There is a super challenging art installation in the Mid-Rise Zone called "Call Me When You're Dead" you can observe with a ping, and using only a couple button presses you can wonder if it's possible to be "filled" with emptiness, if this is really all there is, and suggest that you'd give consciousness less than one star - were possible to do so.

There is a fascinating space in games that exists whenever the systems are muted for a moment, you can only hear them thrum through the wall, and now it's a bunch of people doing things that people have always done forever. The best part of Catan is trading, and the only rules around it are whatever you can cajole a person into. The narrative subtext there is that no matter what you trade an opponent, they're going to kill you with it. They will sharpen it until it goes straight through you. I love every spare, extrasystemic crevice a game has in it that can be filled with communication; you can win against people who you shouldn't be able to with the use of correct speech. I like it when voices are the only tool too, because that's a tricky game in itself, but it's codified here in such a practical, immediate way that sands off the scratchy bits around trying to succeed with complete strangers.

I feel bad about all the voice lines they'll need to do every time they make a new character. Like, real bad. But I also think in any discussion of the genre, this is gonna get dragged out as an example of how not to fuck it up.