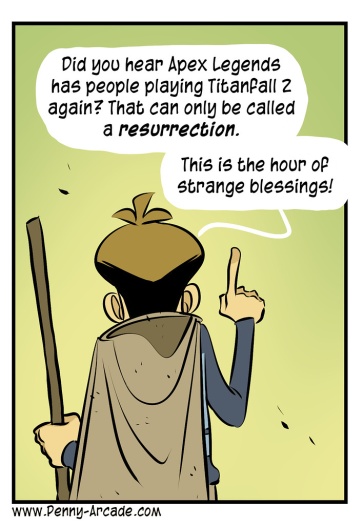 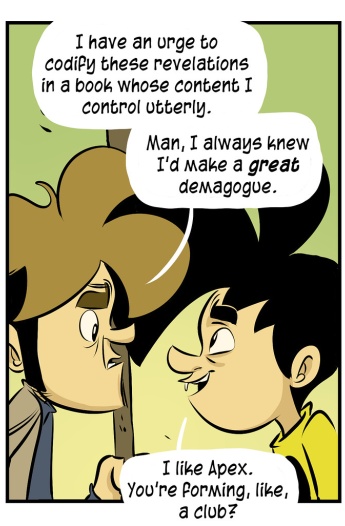 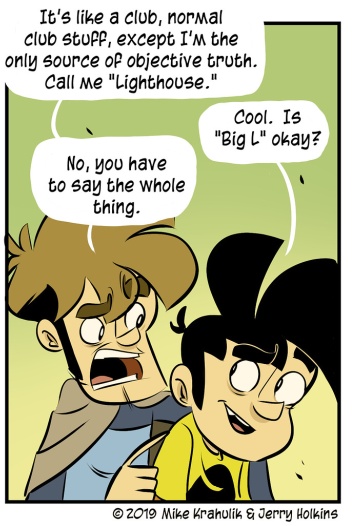 Gabe heard Titanfall downstairs, but on multiple axes - none of which made sense. His sons were playing multiplayer, which they were able to find enough players for somehow, and Kara was playing the single player campaign.

The failure of Titanfall 2 is generally laid at the feet of Electronic Arts for not managing their stable of releases strategically, though there are many fans of the first Titanfall who'll say - independent of any business considerations - that changes to titan shielding and vertically truncated map design didn't help either. Either way, it's wild to think that the a freemium game ostensibly in the same universe somehow goosed this now ancient game, shocking it into terrifying unlife. It has a miraculous quality that we have to onboard and marinate on, and under optimal circumstances I'll be the sole lens through which you can observe the divine.

I'm watching this Activision Blizzard news in horror. We were just down at Blizzard, the paint was still fresh enough to smell in the studio we streamed from, and the guy who brought us down there lost his job as so many others did. And even though cuts were supposedly not in development, that's certainly not true up where I live.

I saw Activision's statement about why they "broke up" with Bungie over at GameSpot, but it's like… more than seven billion wasn't "enough" according to the onyx spire they worship. I don't think they can be trusted to determine what constitutes enough.

I own a company, I understand that they have to make money, but the top of that organization is completely divorced from every other part of it. It's sick in the particular, unaccountable way that is an accelerant to revolution. The people who generate the wealth they bathe in are so abstract as to be inconceivable. I have some experience with this; there are people who will pulp you to get a "good year." One hesitates to suggest that they serve Evil Gods, you know, far be it from me to make a moral pronouncement, but their purposes are inimical to human flourishing. The human being, essentially considered fungible and endlessly replaceable in its capacity to generate value, exists nowhere in their calculus.

The parable of the golden goose has endured for a reason, and that is because none of these motherfuckers ever seems to learn it.