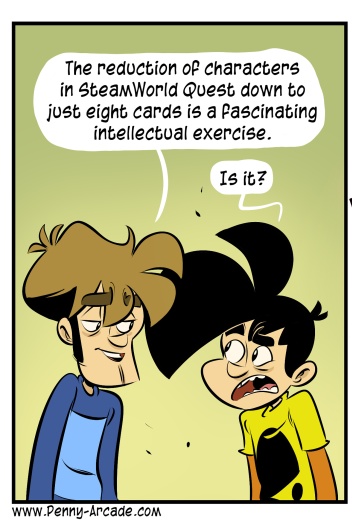 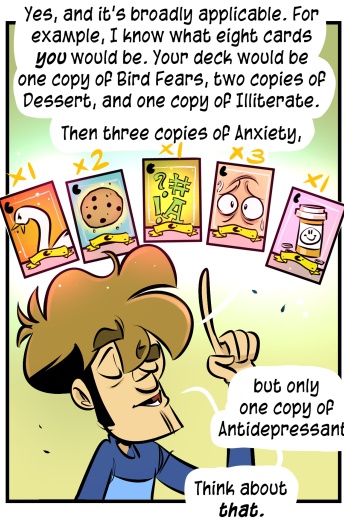 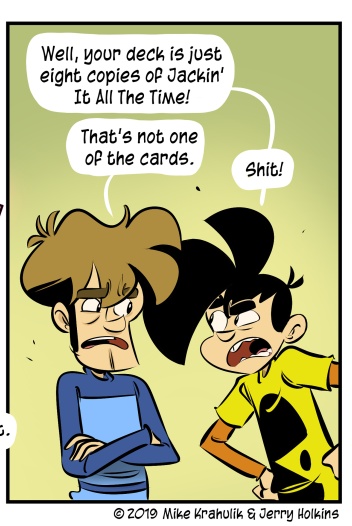 I own all the SteamWorld games, on a variety of platforms, and the restless whimsy of developer Image & Form is always on display. SteamWorld is not a game but an idea; the idea is that cute robots are doing all the things. The era, the characters, and the genre all hang from that, in suspended multiplicity, as though gently swinging on a mobile.

Their newest excursion is called SteamWorld Quest: The Hand of Gilgamech, and even aside from its utility as a philosophical exercise it's carved out a home in my psyche. There are many comics in our archive about what can only be called my kink: the codification of concepts into electronic rectangles that represent cards. But it is also my doom, because my attraction to this pristine and mythic shape means that I get suckered into all kinds of freemium horseshit along with otherwise okay games that just happen to use them. I engage with a lot of games that don't deserve it simply because… I don't know. Because they arrayed their feathers in a particular pattern.

And so when I started watching Gab play, I saw that each character in the party is represented by 8 cards, and shuffling all those characters cards becomes your deck. With you so far, but I've seen that shit. When we get a third member - okay. And if we play three cards from the same person we get a fourth bonus card, one you can't even play otherwise and is determined by the weapon you have equipped - also, you can equip weapons - okay. Now there's cards I can play in a particular order for benefits. And these things, coupled with the fact that the game is legitimately challenging so these things all matter, is what elevates it beyond catechism and into something like a curious reverence. And since it's on the Switch, and only there currently, that means I can play it at stoplights. Don't really do that.

Ryan Hartman, Amy "The Falcon" Falcone, and myself will continue our "reading" of the first Phoenix Wright game at 2pm PDT this afternoon on Tweatch. Come hang out!