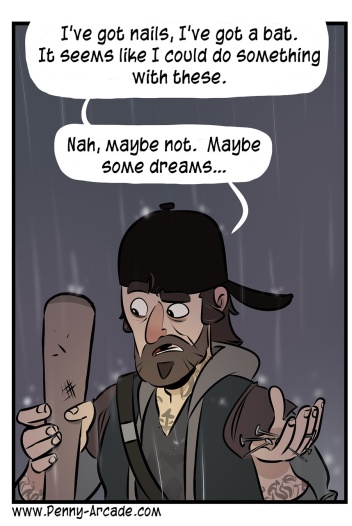 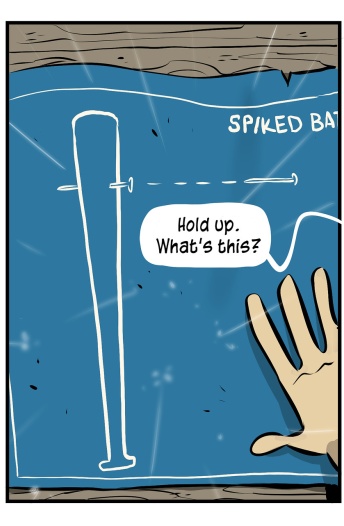 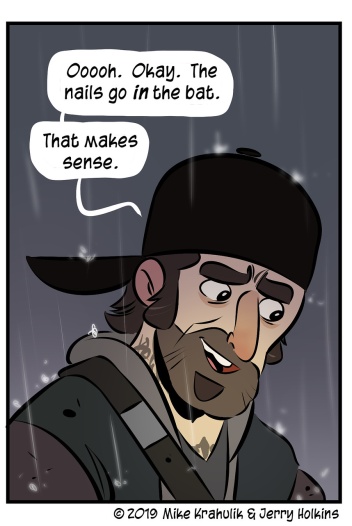 I think I could sit on the couch and watch Gabriel play Days Gone for an indefinite period of time. One of the things about it is that, like Alan Wake, it reveres the kind of terrain I grew up in - the particular kind of wild place we recognize in what is called the Pacific Northwest. I saw a ridge of snowcapped peaks, peaks whose jaunty caps would soon be a phalanx of clean, cold streams and cricks, and I was like, "Yeah. Things are going to be okay" in a way that only clean water and holy nature can make so.

The strip for today is based around the idea that a person, generally speaking, should be able to figure out how to put nails in a bat without a blueprint. I'm rarely called an optimist but I think this is something most people could figure out. As a strip, as a "coherent lozenge" of ideas, I find it a little wordy - there's trust in your audience, and we are blessed with an excellent one that can usually figure out what we mean, but there's also the opacity of the concept which baffles that first instinct. I wonder if there's another way to increase trust without losing the payload. Something like:

Good as an experiment, but this is the line that trusts the reader least. It's essentially a recitation of what you should arrive at, were you a conscious being. That's not quite fair, I suppose, because we're also simulating a person here, someone who couldn't figure out a simple thing, so it's actually a joke about his capacity. Still, I think we should try it this way:

I think this is better. We just have the kind of idiot delight at the end, the face, but we have this bit about Dreams up front that flows naturally into the rest of the concept. Then, we run the strip out with a protagonist that is dumbfounded by this divine revelation. But this makes me think that maybe even that text isn't required - Gabe's shrug is really good here; it reminds me of the kind of late night, paid programming commercial you'd see in black and white with a voiceover that says something like, "Has this ever happened to you." I wonder if that gesture is at a high enough emotional resolution to carry the panel without words. Let's see:

I think it is. But consider, as we considered at the beginning, that any person should be able to handle the task described in the comic. Humor is often crystallized in inversions of expectation, a concept that is sometimes called Safe Danger. You know, by me I guess. The last panel above, as you see, is lit from below and even has the character looking down at something. What if Deacon St. John can't manage this task, even with a diagram? That would offer a wordless distillation of the original concept in a single munition. Something like this, maybe: