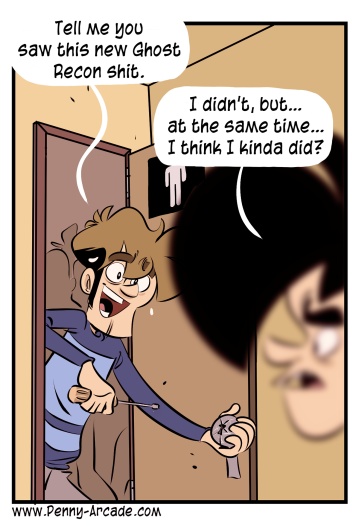 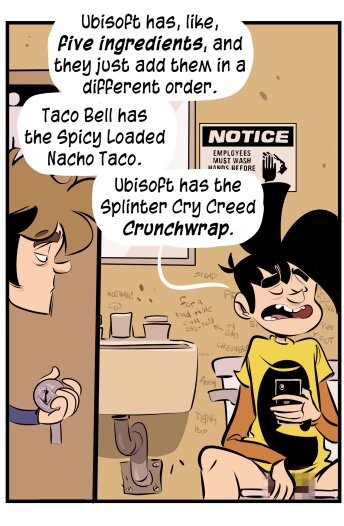 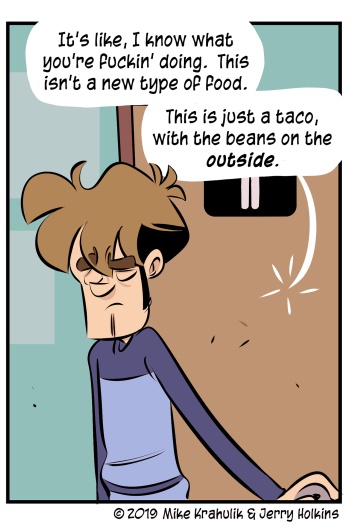 My version of hell is one where my mind operates incorrectly. It's one thing to just be more "enthusiastic" than usual about adjectives; for me, any increase over my already taut baseline shoves the whole operation into space. I'm not talking about that. I'm talking about a fever-borne state of mind where every physical act is coupled with an imaginary purpose in a dreamscape based on rural Oregon, such that needing to cough correlates to placing a fencepost and actually coughing is digging a hole. It went on like this for ten sleepless hours, and I say ten hours because that is what the clock told me, for that evil place had no relationship to time. I sweated through three pillows. Even under the best circumstances, this is not the body you would choose. Being super wet does not elevate its virtues.

While I was recovering from all this, it was time to write a strip - and this timing overlapped with the Ghost Recon: Breakpoint reveal, materializing as it did after another piece of free content for its predecessor Wildlands hinted at the future.

I have Wildlands, I bought it after I got into Division heavily again and my team thought it might be an interesting thing to dry when we hit the GS cap, but in truth hitting the GS cap only made us want to play The Division more than we were already playing it. I have a habit of getting into loot games after they've already thoroughly greased the wheels, so my meteoric rise exposed the content they'd amassed very quickly, with the benefit of everything they'd learned listening to their community. I was the ultimate benefactor of this process. I played through the tutorial and had no-one else to play it with me. It seemed like playing it solo would be counter to its purpose.

I have a history with the franchise in general though; games from Red Storm have always welcomed the co-op player, and its gonzo murder ballet certainly has its charms. Gabe wanted to know how Breakpoint is different from Far Cry, or some amalgamation of Far Cry and their other worn-down molars as he suggests in the strip, but I have a hard time fully agreeing with him here. I think as soon as you let four people play this type of open world content together, it creates outcomes you can't predict. I'm fine with thinking "Ubisoft" constitutes a genre if they're gonna stay with games they way they have the last few years, refreshing them and recognizing the communities that lend them their vitality.

Hey! Since I'm still kinda fucked up, Gabriel and Kara of "Crewhulik" fame are gonna be grabbing the 2-4 slot on the stream with some tender Sea of Thiefs. He's going pretty hard on this shit - get on an Elgato deck and everything. Keep them company? 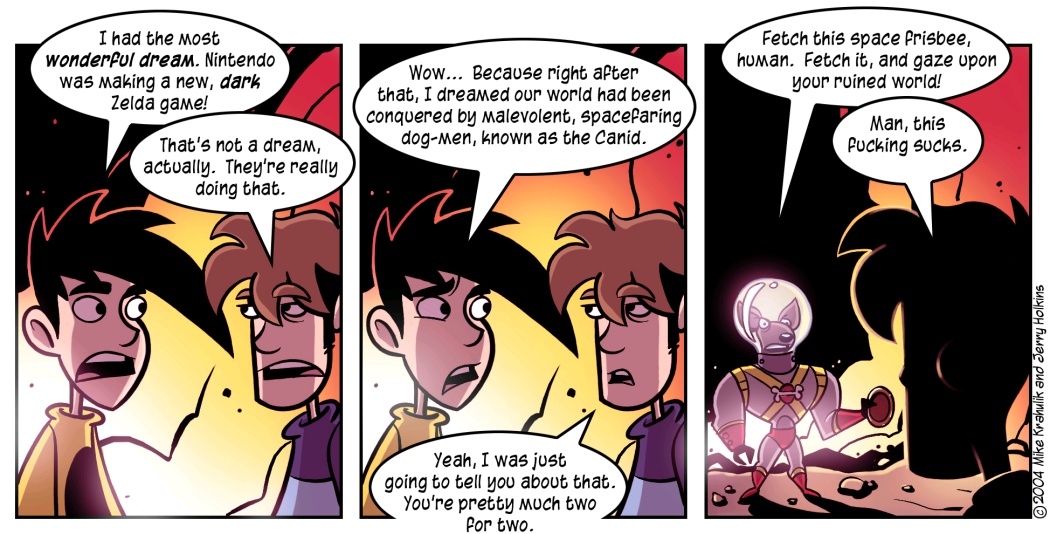