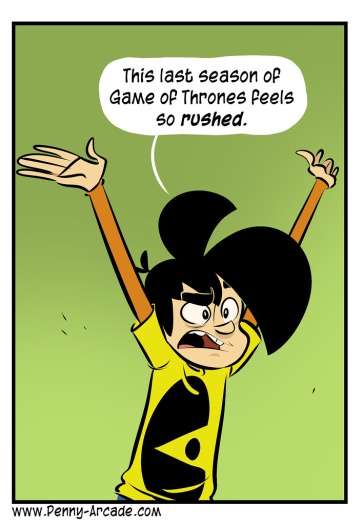 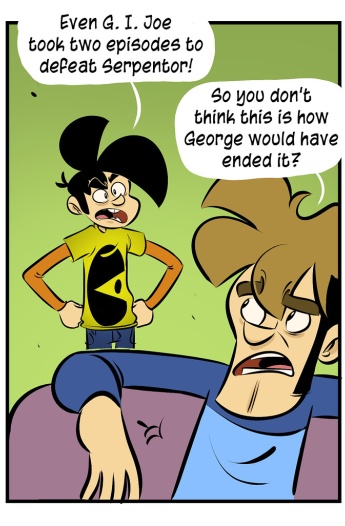 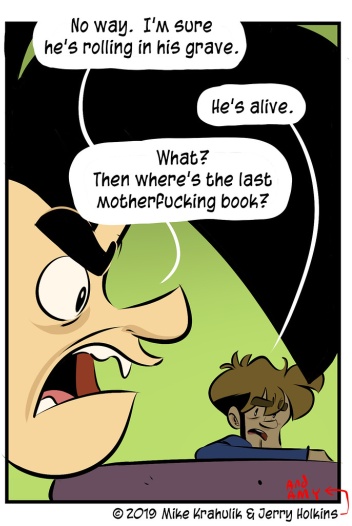 I have been seized by a terrible illness, unfortunately not the kind of illness that would lend vigor to my upcoming mixtape. No, it's more the kind of illness associated with disease. You might note that at the bottom of the strip, in the lower right hand corner, the name Amy is visible - this is a reference to Amy T Falcone, Strip Search alum and repper of the natural world, but also our good friend. So good a friend, in fact, that she colored the strip on stream while Gabriel stuffed his mouth with hot chicken. Thus was the credit earned.

So this week has largely been about getting to the end of Game of Thrones, something that seized so many minds, and feeling like maybe it wasn't commensurate with the investment. Finishing strong is rare enough that three people can sit at lunch trying to figure it out and it still takes a while. And then, somebody will say Sopranos ended well, and the other two people will be like, "Uh…" and then maybe the number of successful endings returns (rhetorically speaking) to zero, as though an industrial accident had just occurred.

I talked about the concept of Safe Danger the other day, it's an idea I think about daily, but it's entirely possible I made it up. So I should explain it at some point. But I think "Showing The Monster" is probably something with wider currency. Eventually, as creators of something longform, you're going to have to pay back all the tension you've earned delaying that reveal. In essence, you're making a withdrawal against future narrative earnings. This is why it's so frustrating when people don't make good at the end; as enthusiasts, as celebrants of a particular piece of media, we've already paid.

I guess it depends on what you want. I want to be murdered by the conclusion of a story, so for me, the ending of Carnivale - even though it wasn't really supposed to be the ending - left me bereft and terrified, which may not be what every person craves from their media but even so. What it enunciated was the cycle - an inexorable kind of hereditary algorithm, revealed its shape, so I could iterate it at will. Thus it is never gone. I can see now how my win condition would be different that someone else's; I need media for a fundamentally different purpose. I need media so I can burn it in my mind and extract valuable compounds. I suspect generally that what's desired is a kind of annihilation: a meeting of oppositional, elemental forces that results in a true resolution of the established drama at more than one level of magnification. Or something...?

Jesus Christ; I really am sick. I'm going back to bed.